The Fauna of Kilimanjaro

You have to be very lucky to see much wildlife on Kilimanjaro. The more exotic fauna of East Africa does occasionally venture onto the mountain. It just doesn’t happen very often. Why? Because most animals prefer to be somewhere where there aren’t 50,000 people marching around every year.

So in all probability you will see virtually nothing of the animals on Kilimanjaro. Over the course of your trek you’ll see little beyond the occasional monkey or mouse. Nevertheless, keep your mouth shut and your eyes open and you never know…

The animals on Kilimanjaro are more numerous down in the forest zone than anywhere else on the mountain. Unfortunately, so is the cover provided by trees and bushes, so sightings remain rare. 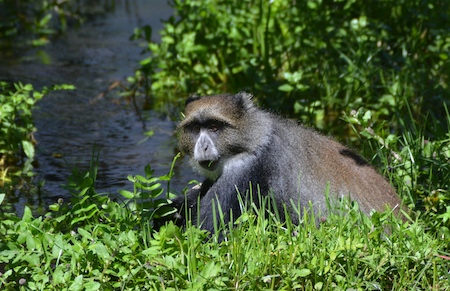 As with the four-striped grass mice of Horombo (see below), it tends to be those few species for whom the arrival of man has been a boon rather than a curse that are the easiest to spot. These include the blue monkeys, which appear daily near the Mandara Huts. Incidentally, these are not actually blue but grey or black with a white throat.

These, however, are merely the plainer relatives of the beautiful colobus monkey. This creature has the most enviable tail in the animal kingdom. You can see a troop of these at the start of the forest zone on the Rongai Route, by Londorossi Gate and a few near the Mandara Huts too.

Further down, near or just above the cultivated zone are the bushbabies. These are more easily heard than seen as they come out at night and jump on the roofs of the huts. Here, too, is the small-spotted genet, with its distinctive black-and-white tail, and the noisy, chipmunk-like tree hyrax.

Olive baboons, civets, leopards, mongooses and servals are said to live in the mountain’s forest as well. That said, sightings are extremely rare. Here, too, lives the bush pig with its distinctive white stripe running along its back from head to tail. 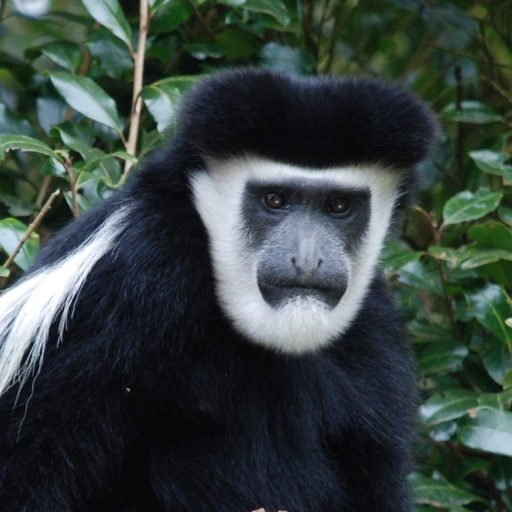 Then there’s the honey badger. Don’t be fooled by the rather cute name. As well as being blessed with a face only its mother could love, these are the most powerful and fearless carnivores for their size in Africa. Even lions give them a wide berth. You should too. Not only can they cause a lot of damage to your person, but the thought of having to tell your friends that, of all the bloodthirsty creatures that roam the African plains, you got savaged by a badger, is too shaming to contemplate.

Of a similar size is the aardvark. This secretive creature has enormous claws. But unlike the honey badger this nocturnal, long-snouted anteater is entirely benign. So fear not: as the old adage goes, aardvark never killed anyone.

Both aardvarks and honey badgers are rarely, if ever, seen on the mountain. Nor are porcupines, Africa’s largest rodents. Though also present in this zone, they are both shy and nocturnal. Indeed, your best chances of seeing one is as roadkill on the way to Dar es Salaam.

One creature you definitely won’t see at any altitude is the rhinoceros. It’s true that a black rhinoceros was seen a few decades ago on the north side of the mountain. But it is now believed that over-hunting has finally taken its toll of this most majestic of creatures. Count Teleki is said to have shot 89 of them during his time in East Africa, including four in one day. Because of this kind of behaviour, there are none on – or anywhere – near Kilimanjaro today.

Heath, moorland and above

Just as plant-life struggles to survive much above 2800m, so animals do too. Yet, though we may see little, there are a few creatures living on Kilimanjaro’s higher reaches. 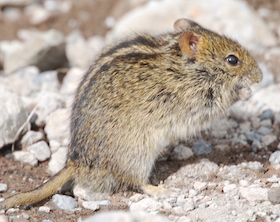 Above the treeline you’ll be lucky to see much. The one obvious exception to this rule is the four-striped grass mouse (above). This little fellow clearly doesn’t find it a problem eking (or should that be eeking?) out an existence at high altitude. Indeed, if if you’re reading this at a camp, one is probably running under your table right now. Other rodents present at this level include the harsh-furred and climbing mouse and the mole rat. All of these, however, are far more difficult to spot.

For anything bigger than a mouse, your best chance above 2800m is either on the Shira Plateau. Here lions are said to roam occasionally. Another good area for wildlife is the northern side of the mountain on the Rongai Route. Kenya’s Amboseli National Park lies at the foot of the mountain on this side and many animals amble up the slopes from time to time. The most frequently visitors are elephants, buffalo and eland. 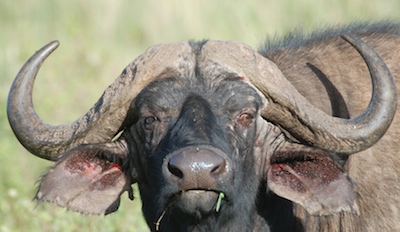 Buffalo are occasionally seen, particularly on the Shira Plateau and the Saddle and near Kikelelwa Camp on the Rongai Route

If you do see a ‘big’ animal on Kilimanjaro, then it will probably be a Grey or red duikers, an eland or a bushbuck. Sightings, however, are still extremely rare. Indeed, one of these larger creatures live above the tree-line of Kilimanjaro permanently. Similarly, the leopard, giraffes and buffalo also occasionally make their way up the slopes. Indeed, they are, like us, no more than day-trippers.

The highest creature of them all!

On Kibo itself the entymologist George Salt found a species of spider that was living in the alpine zone up to 5500m. What exactly these high-altitude arachnids live on up there is unknown. That said, Salt himself reckoned it was probably the flies that blew in on the wind. He actually found a few of these flies, which appeared to be unwilling or unable to fly. What is known is that the spiders live underground, better to escape the rigours of the weather.

Kilimanjaro is great for birdlife. The cultivated fields on the lower slopes provide plenty of food, the forest zone provides shelter and plenty of nesting sites, while the barren upper slopes are ideal hunting grounds for raptors.

In the forest, look out for the noisy dark green Hartlaub’s turaco. There used to be one nesting near the first-day lunch stop on the Machame Route. It’s easy to distinguish when it flies because of its bright red under-wings. The silvery-cheeked hornbills and speckled mousebirds also hang around the fruit trees in the forest, particularly the fig trees.

There’s also the trogon which, despite a red belly, is difficult to see because it remains motionless in the branches.

Smaller birds include the Ruppell’s robin chat (black and white head, grey top, orange lower half) and the common bulbul, with a black crest and yellow beneath the tail. 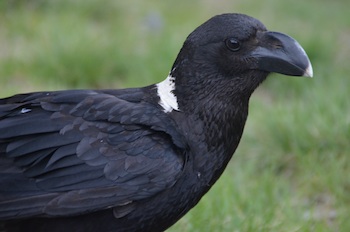 White-necked raven, a common visitor to the campsites on Kili.

Further up the slopes, the noisy, scavenging, garrulous white-necked raven is a constant presence on the heath and moorland zones. Eternally hovering on the breeze around the huts and lunch-stops, it’s always on the lookout for any scraps. Smaller but just as ubiquitous is the alpine chat. This small brown bird has white side feathers in its tail. Of a similar size, the streaky seed-eater is another brown bird (this time with streaks on its back) that often hangs around the campsites. The alpine swift also enjoys these misty, cold conditions.

The most beautiful bird of them all

The prize for the most beautiful bird on the mountain, however, goes to the dazzling scarlet-tufted malachite sunbird. 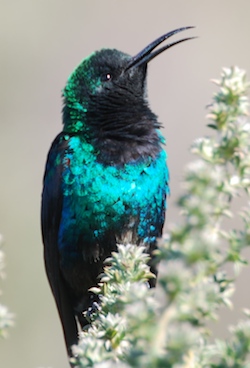 The most gorgeous bird on Kilimanjaro? The malachite sunbird

Metallic green save for a small scarlet patch on either side of its chest, this delightful bird  hovers above the grass, hooking its long beak in to reach the nectar from the giant lobelias or feeding on the lobelias.

Climbing further and we come to raptor territory. You’ll rarely see these birds up close as they spend most of the day gliding on the currents looking for prey. The mountain and augur buzzards are regularly spotted hovering above the Saddle.

These are impressive birds in themselves, especially if you’re lucky enough to see one up close. But neither is as large as the enormous crowned eagle and the rare lammergeyer. The latter is a giant vulture has long wings and a wedge tail. You can see one as a background to the header at the top of this page.