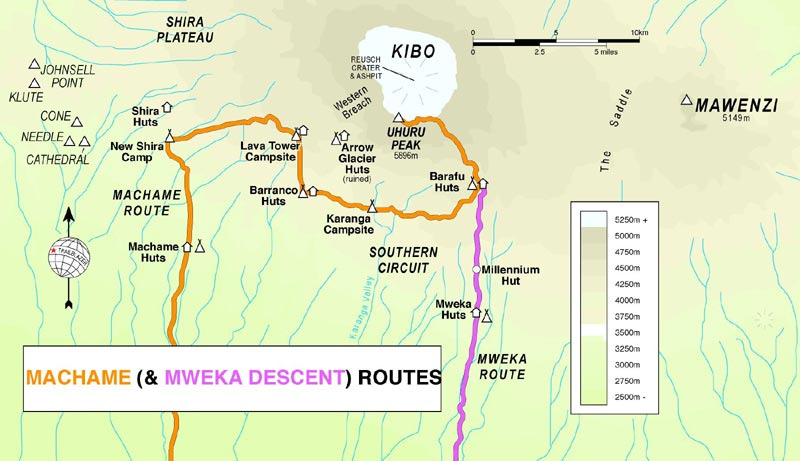 The Machame Route now vies with – and indeed over the last few years has overtaken – the Marangu Route as the most popular trail. Machame is also the regarded by many guides as the most enjoyable, though it is longer and, according to most, more arduous. Despite this, the success rate on the Machame Route is higher than on the Marangu Route, possibly because the Machame is a day longer at six days and five nights (assuming you take the Barafu Route to the summit) which gives trekkers more time to acclimatize. An extra acclimatization day can – and usually is  – taken in the Karanga Valley. The Machame Route also gives you the option of taking the Western Breach / Arrow Glacier Route to the summit.

Where does the Machame Route go?

It is not difficult to see why the Machame Route is so popular with everyone: beginning on the south-western side of the mountain, this 40.16km trail (36.7km if trekking via the Western Breach) passes through some of the mountain’s finest features, including the cloud forest of Kili’s southern slopes, the dry and dusty Shira Plateau and the delightful senecio-clad Barranco Campsite. To reach the actual summit you have a choice of two paths: most people head for the lengthy, long-winded climb up the Barafu trail, with the Rebmann Glacier edging into your field of vision on your left as dawn breaks behind Mawenzi behind you. Alternatively, the more adventurous can go on the Western Breach Route, departing from the regular trail at Lava Tower on the  western side of Kibo before heading up to chilly Arrow Glacier Campsite, then pressing on from there to the crater floor,  gaining access to the crater at a point near the Furtwangler Glacier. Many people will spend a night here at the Crater Campsite, before pushing on up the crater’s southern rim to Uhuru Peak.

Unlike the Marangu Route, on the Machame Route you don’t use the same path to descend as you took to climb up the mountain, but instead you come down via the Mweka Route, a steep but very pretty descent encompassing inhospitably dry mountain desert and lush lowland forest in a matter of a few hours.

Is the Machame Route hard?

Curiously, though the Machame Route is widely reckoned to be harder than the Marangu Route (and is thus nicknamed the Whiskey Route, in opposition to Marangu’s softer soubriquet of the ‘Coca Cola trail’), the proportion of trekkers who reach the top using this route is marginally but significantly higher. Whether this is evidence that the Machame Route allows people to acclimatize better because it’s longer, particularly if you opt to take the Barafu Route to the summit, or whether this higher success rate is merely an indication that more experienced, hardened trekkers – ie the very people who are most likely to reach the summit – are more inclined to choose this route, is anyone’s guess.

How long does the Machame Route take?

The Machame Route via Barafu traditionally lasts for six days and five nights, though it is becoming more common for trekkers to opt for an extra night during the ascent, usually above the Karanga Valley. Not only does the extra day aid acclimatization but this also reduces from almost six to three the number of hours walked on the day that precedes the exhausting midnight ascent to the summit, thereby allowing trekkers more time to recover their faculties, relax and prepare themselves for the final push to the top. The book has a thorough day-by-day description of the Machame Route.

If taking the Western Breach Route, again this can be done in six days though you would be foolhardy to do so – seven is a much more sensible length.

For a file of GPS waypoints for all our routes, please click on the following link GPS Waypoints. This will take you to the relevant page on the website of Trailblazer Publications, who publish the Kilimanjaro guide. The file is in .gpx format, so you can download it straight onto your GPS.