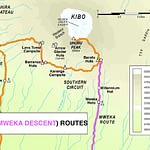 Click on the above icon for a Machame route map

Now vying with the Marangu Trail as the busiest trail on the mountain, the Machame Trail’s popularity is justly deserved, with many porters and guides also naming it as their favourite. Also known as the Whiskey Route to distinguish it from the Marangu path (which is known as the Coca Cola Trail), the Machame Route takes in some of the finest parts of the mountain, including the atmospheric Shira Plateau and the lunar landscape near Barafu Campsite. And compared to the Marangu Trail, statistics show that the Machame Route offers a higher chance of reaching the summit too!

The following itinerary is for six days; those on a seven-day trek will, more often than not, spend a night at Karanga at the end of Day 4 (see below). 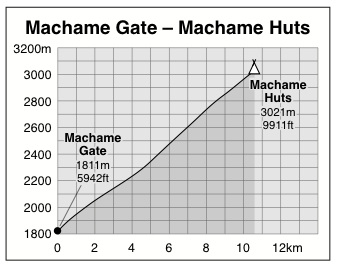 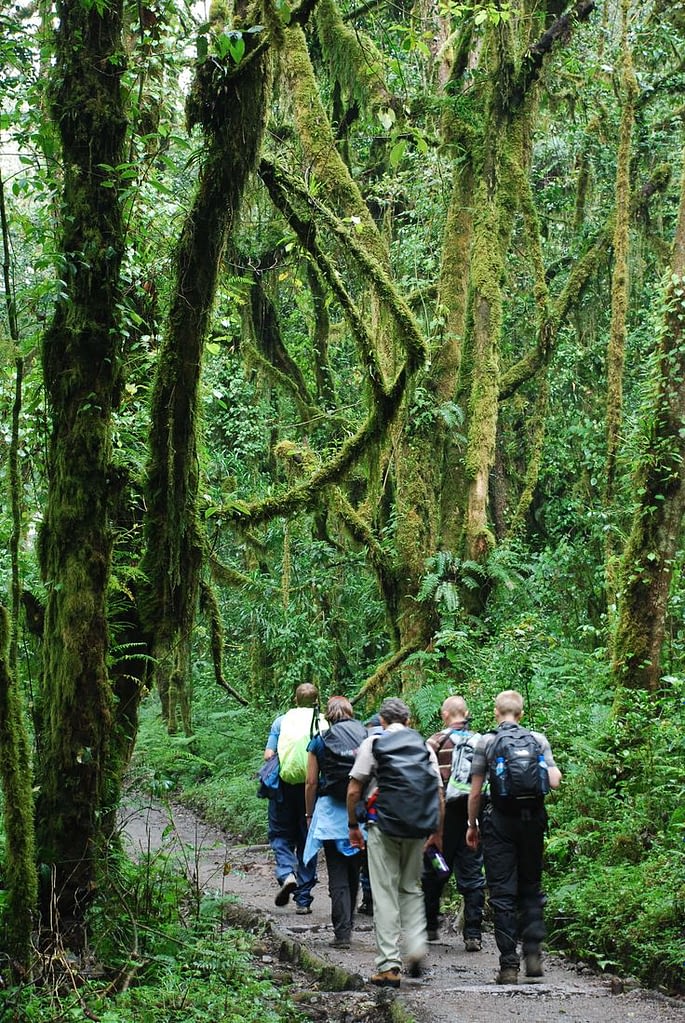 Our adventure begins after breakfast at around 8am when our car arrives to pick you up from your hotel and take you to Machame Gate (1828m), where you must register.

The first day of the trek takes you into the forest bearding Kilimanjaro’s lower slopes. It’s quite a sweaty uphill walk of 10.5km or so, though there is plenty to distract you as we look out for some of Kilimanjaro’s unique, endemic flora, as well as colobus and blue monkey and other creatures of the forest. We will also break for lunch while in the forest.

At the day’s end we reach the upper limit of the forest and the Machame Camp (3032m), with views over the treetops to the plains below. Your porters will already have your tents erected and will be busy preparing dinner. 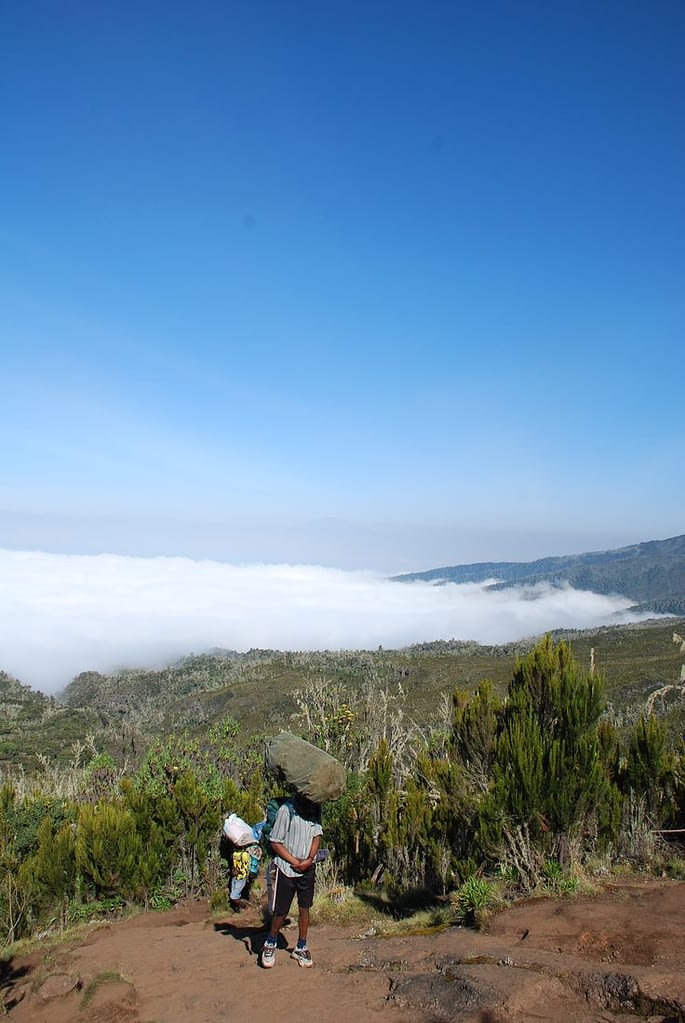 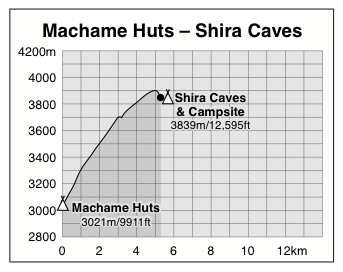 Once again the second day involves a steepish trek as we leave the forest behind and plough through the heath and moorland – Kilimanjaro’s second vegetation zone. (There are four or so vegetation zones on the mountain, which is why some people say that the climb is going through four seasons in four days.) During today, and fairly early on, we will also catch our first glimpse of Kibo, Kilimanjaro’s famed, snowy summit – and our ultimate destination. Mount Meru, Kilimanjaro’s nearest neighbour, is also visible during today’s trek. You will notice, too, that we will be setting a deliberately slow pace from today onwards, to help everyone acclimatize to the thinning air.

About an hour after lunch, the gradient levels out slightly as we approach the Shira Plateau, with more celebrated Kilimanjaro flora such as groundsels and weird lobelias.

Our final destination on this second day is the Shira Cave Campsite (aka New Shira Campsite), with views up the plateau towards Kibo as well as westwards towards Kili’s little-known third summit, Johnsell Point. As with every campsite on the route, your tent will be erected and snacks will be served upon arrival, followed by a main meal later in the evening. 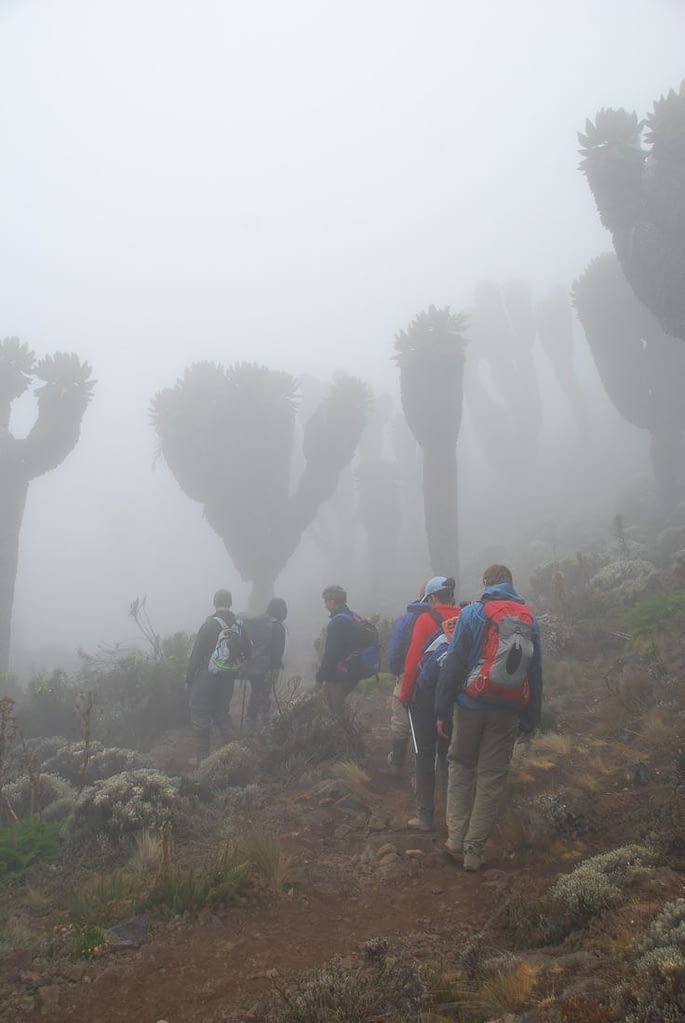 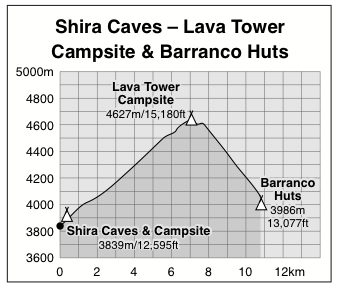 The morning begins with a lengthy crossing of the plateau as we head due east toward Kibo. It’s a long walk but a very photogenic one with the snowy summit of Kilimanjaro a constant looming presence ahead; most people, I find, say that this is their favourite part of the walk.

Lunch this time is taken near the Lava Tower, at the foot of Kibo. We are now heading into some serious altitude, with Lava Tower standing at 4530m above sea level. For this reason, it is normal for people to have a slight headache when they finally reach our campsite for the evening, Barranco Camp, following a steep descent to 3986m. This is entirely normal, and only worrying if the symptoms persist. By way of compensation, Barranco is the prettiest campsite on the route, set amongst a grove of senecio hard against the south face of Kibo. Snacks and then dinner is served in the evening. 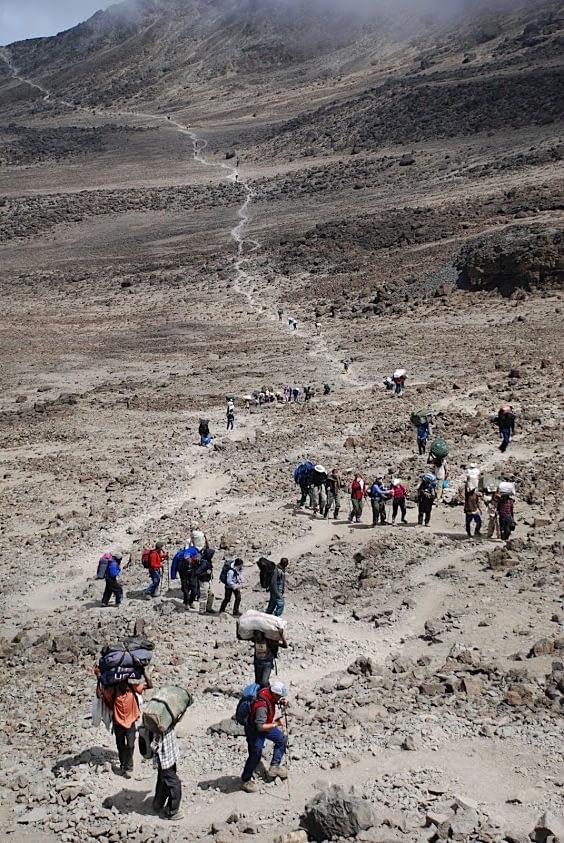 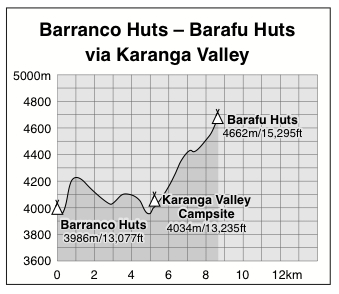 Today is a short day of only three hours or so, built in to make sure you are fully rested and relaxed in order to prepare you for the extra long day tomorrow. Nevertheless, the start of today is a bit of a shock as you are immediately confronted by the Barranco Wall. Taking over an hour to climb, you may need to use your hands on occasions to haul yourself up the rocks but please don’t be over-concerned – this is not mountaineering, the wall is not dangerous (I’ve never heard of anyone falling off it), and nor have I ever heard of anyone failing to complete it.

At the summit of the wall the path drifts and meanders gently to the Karanga Valley, a gorgeous little place where malachite sunbirds flit from flower to flower. If we were on a seven-day trek we would find our campsite lies at the top of the other side of the valley, a stiff but short climb up from the Karanga stream. Both lunch and dinner will be served at this campsite. But for a six-day climb we still have another three hours or so to go as we traverse the southern side of Kibo, walking through a spectacular lunar landscape bereft of life on our way to Barafu Camp, on the south-eastern shoulder of Kibo.

Here we will rest, take lunch and dinner, and try to get some sleep before the rigours of the night ahead…. 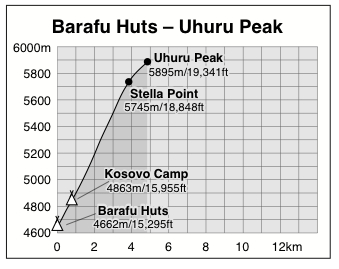 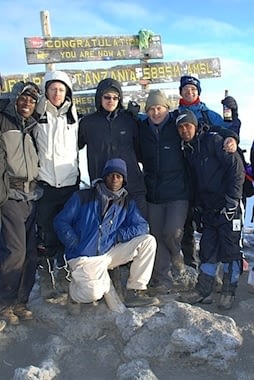 Arising at around midnight, we begin our slow march up to Stella Point (5745m) on the edge of the Kibo crater. It’s a steep, slow, cold march and a test of your endurance – this is where you’ll earn your Kilimanjaro certificate. Nevertheless, providing you have avoided altitude sickness and have acclimatized well, there is no reason why you shouldn’t make it up to Stella Point. This we reach, all being well, at around 5am, though it can be much later depending on your condition.

From Stella Point it is a mere 45 minutes further on, past glaciers and snowfields and with views over the Kibo Crater, to Uhuru Peak – at 5895m the highest point in Africa! Here, if we’re on time, we can watch the sun rise over the African continent, take photos – and take a breather too! 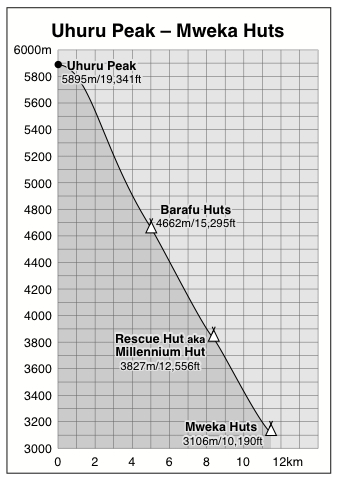 After a rest at the top, we continue back down to Barafu Camp – a walk that is considerably quicker than it was on the way up! At Barafu we take breakfast and relax for an hour, before continuing our march down the mountain, this time on the Mweka Trail. Today’s walk takes us back down through the alpine desert, heath and moorland zones until we once more enter the forest zone via Millennium Camp (3827m). There, amongst the trees, we find the Mweka Campsite (3106m), our final stop on the trek. We should arrive there at about 4pm – and you have been walking for around 16 hours, less breaks! Exhausting but, if you made it to the top, you’ll think it was worth it! 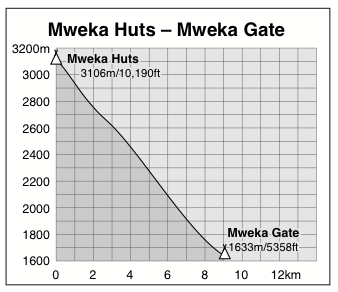 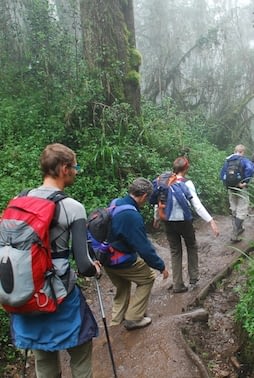 It’s just a couple of hours further now from the campsite to Mweka Gate (1633m), where those who made it to the summit or Stella Point will collect their certificates. A car will be waiting to take you back to your hotel, and a land of warm showers and cold beers. Your trek is at an end.