The Shira Plateau and Lemosho Routes 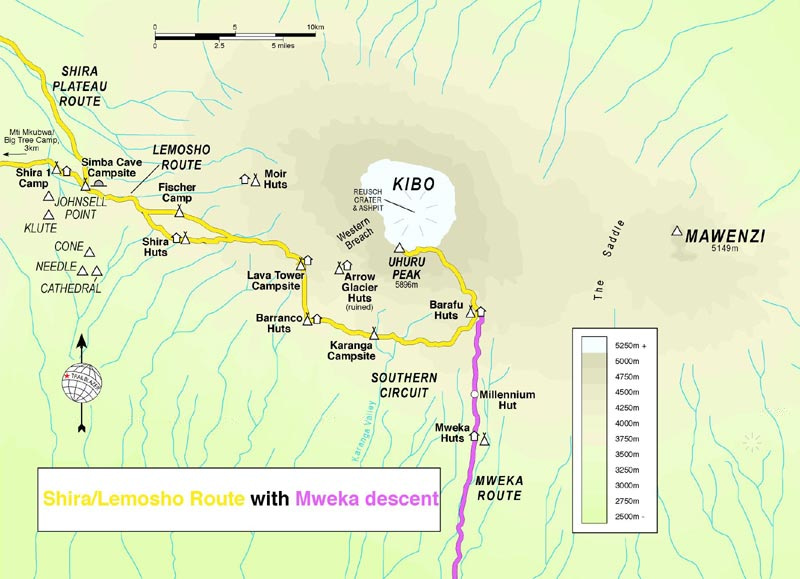 These two routes are lumped together under one heading as both involve a crossing of the expansive Shira Plateau which stretches out for around 13km to the west of Kibo. This plateau is actually a caldera, a collapsed volcanic crater: when you are walking on the plateau, you are walking on the remains of the first of Kilimanjaro’s three volcanoes to expire, around 500,000 years ago; it was then filled by the lava and debris from the later Kibo eruption.

The plateau has a reputation for its fauna, largely thanks to its proximity to Amboseli National Park in Kenya from where herds of elephant, eland, buffalo, and big cats such as the lion have been known to wander. Indeed, not so many years ago trekkers on these routes had to be accompanied by an armed ranger (for which they had to pay) to protect them against encounters with predators. That said, you will be very, very lucky to see any evidence of wildlife existing on the plateau, save for the odd hoofprint or two and the occasional sun-dried lumps of scat and spoor

So while the proximity of Africa’s finest wild beasts adds a certain frisson of excitement to the walk, don’t choose either of these trails purely on the strength of their reputation for spotting game: it’s an awful long way to come just to see some desiccated elephant shit.

As to the relative merits of the two: the Shira is seldom used these days as it’s largely a 4WD track used by emergency vehicles. (There is one major company that still advertises and this route, though they diverge significantly from the standard Shira trail.) The other main disadvantage with Shira is that it starts at the Morum Barrier which is above the forest on the western slopes. As this is the best forest on the mountain in our opinion, we think this is unforgivable!

As for Lemosho, it’s our favourite of the official routes on the mountain – only the Alternative Lemosho Route is better in our opinion. (Though we do love Umbwe too – but recognise that the steepness of this trail will put some off.) Please contact us if you would like more details about this route and who can arrange a trek on this trail.

Shira or Lemosho: which route am I on?

The first thing to know about these two routes is that it is common for the newer Lemosho Route to be referred to as the Shira Plateau Route, particularly by foreign agencies keen to promote the fact that you’ll be walking across the Shira Plateau. This, of course, is confusing so you should ask your agency to indicate exactly which of the two paths you’ll be taking.

Another way to check is to see where your first night’s accommodation will be; if it’s the Big Tree Campsite – or Mti Mkubwa in the local language – where you’ll be staying, then it’s actually the Lemosho Route that you’ll be following, regardless of what your trekking agency calls it.)

The Shira Plateau Route is the original plateau trail, though it is seldom used these days, for much of it is a 4WD track and walkers embarking on this trail often begin their trek above the forest in the moorland zone. Having crossed the plateau and reached the foot of Kibo at Lava Tower, you then have two choices: the longer and easier Barafu Route that takes you round the southern side of Kibo; or the Western Breach Route via Arrow Glacier and the Crater Camp. As such, the walk could last as many as eight days if taking the Barafu Route and extra overnight stops on the plateau and in the Karanga Valley are taken – if not, seven days is more likely.

The Lemosho Route improves on the Shira Plateau Route by starting below the Shira Ridge, thus providing trekkers with both a walk in the pristine forest of west Kilimanjaro at the start of the trek and more time to acclimatize.

The Lemosho Route also includes a crossing of the Shira Plateau which precedes an assault on the summit via Barranco, Karanga Valley and Barafu to Stella Point on the Barafu Route; or, alternatively, via the Western Breach Route up to the Kibo crater floor and onto the summit. The usual descent route is the Mweka trail. Overall, allow seven-eight days if stops at Shira 1, Shira Huts and in the Karanga Valley are taken.

What are the advantages with the Lemosho Trail?

It is the first day or so, when you are walking through the forests on Kilimanjaro’s western slopes, that is the main reason why this trail has overtaken the old Shira Pateau Route as the main path attacking Kilimanjaro from the west. With the latter you usually take a car all the way up to the plateau, thereby missing out not only on some fine forest, which you experience only through a car window, but also on some useful acclimatisation.

And although the walk up to the plateau on the Lemosho Route is an exhausting one, the benefits of trekking rather than driving up may manifest themselves later on as you saunter up Kibo with scarcely a headache, while littering the trail around you are the weeping, retching bodies of the AMS-sufferers who took the car up to the Shira Plateau.

What’s more, because Lemosho is a more southerly route, so it allows side trips to the minor peaks of Kilimanjaro’s third summit, the Shira Ridge. In particular, the Shira Cathedral, on the southern side of the plateau, has become a very popular excursion on the third day of the trek. Again, such a side trip is useful for acclimatization purposes and no extra days need to be taken to do this either.

Other side trips that do require an extra day include a trek to the Moir Huts on the north-western side of the mountain. Indeed, one of the joys of the Lemosho Route is the variety of different trails one can take and itineraries one can build – there is no one standard ‘Lemosho Route’. Plus, of course, being a route that attacks the mountain from the west, the Lemosho also allows you to take the Western Breach Route to the summit if you prefer.

As we said above, Lemosho is our favourite of the official routes on the mountain – only the Alternative Lemosho Route is better in our opinion. Both the official Lemosho and the Alternative version can boast (again, this is just our opinion) the best forest at the start of the trail, followed by some of the best scenery and views once you leave the forest behind. Because they’re also the longest routes on Kili, so you get to see more of the mountain and your body has more chance to acclimatise so the success rates for getting people to the summit is very high. Finally, the official Lemosho and the Alternative Lemosho are two of the quieter routes on the mountain – particularly the latter, as it takes you away from the crowds around the sourthern side of Kibo, opting instead for the much quieter Northern Circuit.

And the disadvantages of the Lemosho Trail?

Not many really. In our experience we reckon it is the wettest route, though that could be just because we have always been unlucky – because meteorology certainly doesn’t back us up on this.

For a file of GPS waypoints for all our routes, please click on the following link GPS Waypoints. This will take you to the relevant page on the website of Trailblazer Publications, who publish the Kilimanjaro guide. The file is in .gpx format, so you can download it straight onto your GPS.