At first sight, Kilimanjaro’s glaciers look like nothing more than big smooth piles of slightly monotonous ice. On second sight they pretty much look like this too. Yet there’s much more to Kili’s glaciers than meets the eye, for these cathedrals of gleaming blue-white ice are dynamic repositories of climatic history – and they could also be providing us with a portent for impending natural disaster. 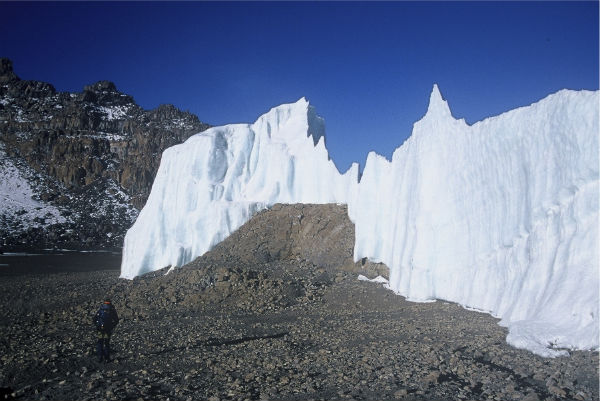 You would think that with the intensely strong equatorial sun, glaciers wouldn’t exist at all on Kilimanjaro. In fact, it is the brilliant white colour of the ice that allows it to survive as it reflects most of the heat. The dull black lava rock on which the glacier rests, on the other hand, does absorb the heat; so while the glacier’s surface is unaffected by the sun’s rays, the heat generated by the sun-baked rocks underneath leads to glacial melting.

As a result, the glaciers on Kilimanjaro are inherently unstable: the ice at the bottom of the glacier touching the rocks melts, the glaciers lose their ‘grip’ on the mountain and ‘overhangs’ occur where the ice at the base has melted away, leaving just the ice at the top to survive. As the process continues the ice fractures and breaks away, exposing more of the rock to the sun… and so the process begins again. The sun’s effect on the glaciers is also responsible for the spectacular structures – the ice columns and pillars, towers and cathedrals – that are the most fascinating part of the upper slopes of Kibo. 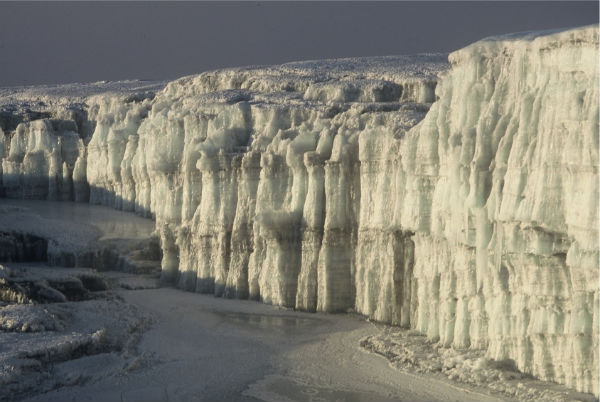 Why haven’t Kilimanjaro’s glaciers melted away?

One would have thought that, after 11,700 years of this melting process, (according to recent research, the current glaciers began to form in 9700BC) very little ice would remain on Kilimanjaro. The fact that there are still glaciers is due to the prolonged ‘cold snaps’, or ice ages, that have occurred down the centuries, allowing the glaciers to regroup and reappear on the mountain. 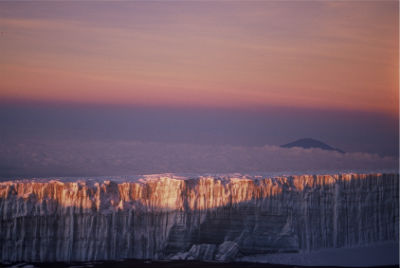 The Southern Icefield at sunrise, with Mount Meru in the distance

According to estimates, there have been at least eight of these ice ages, the last a rather minor one in the fifteenth and sixteenth centuries, a time when the Thames frequently froze over and winters were severe. At these times the ice on Kilimanjaro would in places have reached right down to the tree line and both Mawenzi and Kibo would have been covered.

At the other extreme, before 9700BC there have been periods when Kilimanjaro was completely free of ice, perhaps for up to twenty thousand years.

How is global warming affecting them?

Of course as our planet heats up there are bound to be consequences for the glaciers on Kilimanjaro. It’s a topic we cover in our Climate Change and Kilimanjaro page. But nobody can be 100% sure what will really happen to the glaciers and every so often we have another prediction from experts bringing either good or ghastly news.

You can read many of these predictions in our news archive section – here’s a selection: