Spectacular conditions on Kilimanjaro
Posted by Henry at 8:33 am, March 30th 2010.
A few of our clients who have come of the mountain in the past few days have talked about the terrible weather currently hitting Kilimanjaro. Bad weather at this time of year is, of course, nothing unusual – it is, after all, the start of the main rainy season and April/May are often difficult times to climb, so the fact that the end of March is also tough is no great surprise. What is surprising is just how bad they are, with snow strecthing down below Horombo and very wet conditions at the bottom. Indeed, one of our guides, Freddie Achedo, was saying that he had never seen such bad conditions – and he has climbed over 320 times!

One of our trekkers, KK Condon, has kindly agreed to allow people to see her photos that she has put onilne.

The photos on this Flickr site don’t look too bad – at least until Kibo, when the snow suddenly seems very heavy and covers the entire summit! But suffice to say that it did make trekking a very difficult affair – KK explained that it took the three of them twelve hours to get from Barafu to the summit (it should take about six) – and they believe they were (unsurprisingly) the only people on the summit that day.

Climbers wanted for Kujali International charity climb
Posted by Henry at 10:05 pm, March 28th 2010.
We’ve received an email from Sarah Lowe of Kujali International requesting that we put out an advert for trekkers, who are needed for their fundraiser challenge to finish building a secondary school outside of Dar es Salaam by organizing a climb of Mt Kilimanjaro in August.

Further details are available on the website, where you can also find a link to a promotional video they have made (the video is at
http://www.youtube.com/watch?v=2oF7sSVfsNc).

In September this year two plucky young Brits will be taking on the challenge of climbing Africa’s highest mountain in aid of Brain Tumour Research.

They have set up a justgiving page to help them collect the £7000 they are hoping to raise in sponsorship money. You will also find on this site links to their weblogs, which they are producing for every stage of their preparation and climb.

The address is www.justgiving.com/KellyMandjaro – which is just about the cleverest ‘justgiving’ webpage title I’ve seen.

We do of course wish them both well – and will keep you updated on their progress and how they get on when they’re actually on the mountain.

Climb for Generosity Water
Posted by Henry at 11:07 am, March 20th 2010.
In January next year Heidi Hurst will be climbing for Generosity Water, an organization dedicated to helping end the world water crisis. The goal is to raise enough to fund at least 10 clean water wells in needy third-world countries (approx. $90,000).

Heidi has created a website to advertise her climb and allow people to follow her progress: [ADDRESS NO LONGER VALID]

We do of course wish Heidi well and will let you know of her progress in the months leading up to her trek.

Mauly Tours greatly improved say KPAP
Posted by Henry at 8:44 am, March 11th 2010.
I have just received an email from Karen Valenti, ‘boss’ of the Kilimanjaro Porters Assistance Project that fights for the rights and welfare of porters on God’s Greatest Mountain.

In the email, Karen, surprisingly for those who know the previous reputation of the company, praises the Moshi-based trekking agency Mauly Tours.

As Karen writes: “I would like for you to know that Mauly has taken major steps to be in compliance with KPAP’s guidelines. These include the weighing procedures, [and] use of tipping sheets and salary records in which each of the crew sign for the payments.

“I honestly am quite impressed with their current performance. We will need to monitor their activities the remaining of the season, particularly with porter interviews. But I do see that they have a very good potential of becoming a Partner for Responsible Travel soon.”

This is very good news, particuarly as previously Mauly had been renowned as one of the worst performers when it came to porter welfare. We would like to offer our congratulations to Mauly for the steps they have taken – and to KPAP, of course, for persuading one of the larger operators on Kilimanjaro to improve its treatment of their staff.

We’re travelling around Tanzania!
Posted by Henry at 10:47 am, February 13th 2010.
Just a quick note to say that we will be travelling around bits of Tanzania over the next couple of weeks. As such, do please be patient if you haven’t had a response to any emails you send us over the next fortnight. We will, of course, answer all emails as soon as we are able.

Thanks for your understanding!

Microsoft executives to climb Kilimanjaro for Africa
Posted by Henry at 7:53 am, February 12th 2010.
At the end of this month Microsoft Africa executives will be climbing Mount Kilimanjaro with the intention of raising funds for Miracle Corners of the World (MCW). The funds raised by Microsoft employees, partners and customers will be used to help build learning centres in African countries, as part of Microsoft Africa’s broader initiative to support educational development on the African continent, giving back to the communities within which it operates.

MCW is a non-profit organization founded in 1999. Its vision is Local Change Through Global Exchange and its mission is to empower youth to become leaders of change. Please visit www.miraclecorners.org to donate to the initiative.

We wish them all the best on the mountain – and will let you know how they get on!

Climb for Muscular dystrophy and Out of Afrika
Posted by Henry at 8:55 am, February 11th 2010.
In September of this year Jude Mahoney, along with friends Peter Glenn and Jia Yan Gu, are climbing Mount Kilimanjaro for two charities, the Muscular Dystrophy Campaign and Out of Afrika – a charity founded in the UK that works at grass roots level with communities in Kenya to promote education to orphans and disadvantaged children to increase self-sufficiency and long term sustainability. We’re looking to raise £15,000 – an ambitious amount by anyone’s reckoning – which is why they have begun to advertise their climb 8 months in advance; and wy they’ve got in touch with us to help them in their fundraising. Which we are of course happy to do so.

We do of course wish them well in their endeavours.

Climb to to raise awareness of pulmonary hypertension
Posted by Henry at 9:37 pm, February 9th 2010.
On February 19-26, pulmonary hypertension (PH) specialists and Pulmonary Hypertension Association Scientific Leadership Council members, Drs. Ray Benza and Robert Frantz, along with Jessica Lazar, PA, will know firsthand what it means to be breathless. For in a joint effort to raise global awareness of PH – a condition which occurs physiologically while ascending to high altitude), they will tackle the ultimate challenge – climbing Mount Kilimanjaro, Africa’s highest mountain!

In addition to raising awareness of pulmonary hypertension, they also hope to raise $100,000 for PH research.

They have set up a website about their expedition at: http://www.phassociation.org/pathtoacure/

They have also set up a training blog at www.pathtoacure.blogspot.com

We do, of course, wish them well in their climb – and will hopefully let you know how they get on!

Third Edition of Kilimanjaro guidebook here at last!!
Posted by Henry at 11:48 am, January 25th 2010.
We’re delighted (well, relieved more than anything) to be able to annunce that the long-awaited third edition is finally – FINALLY! – here. We received a boxload this morning, and presuably they’ll be in the shops ery shortly too.

We do apologise to everyone who’s been waiting, particularly those who’ve written to me wondering where they can get hold of a copy – plus, of course, those who are climbing with us and who hae been (patiently) waiting for their complementary copy too. I will personally be sending those out over the next couple of days. I will also be sorting out the Amazon links (right) so that you can once more buy the book through this website.

Once again, thanks for patience over the past few weeks.

Third edition on its way!!
Posted by Henry at 12:05 pm, January 2nd 2010.
The third edition of our bestselling guide to Kilimanjaro is finally on its way back from the printers and should be in your shops in the next month. I have seen a copy now – so I know it exists! – and it should be in the shops soon.

I notice that Amazon.com (ie the US) are estimating that they will have the book available for sale on Feb 23 but I think they are being a touch pessimistic.

If it’s not already on general sale, then perhaps one of the best ways to get hold of a copy is at the Adventure Travel Show at the Royal Horticultural Halls at Victoria, London, 29-31 January 2010. 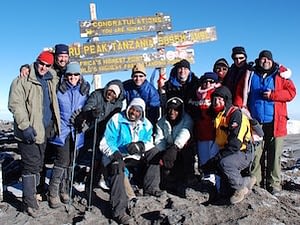 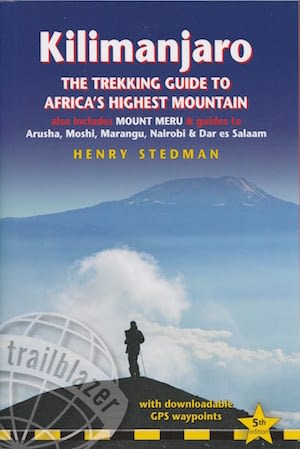 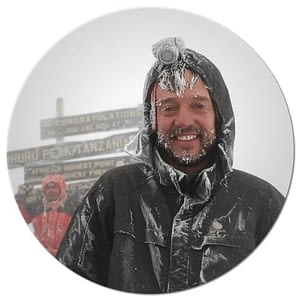