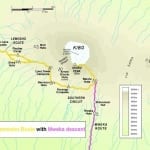 Click on the icon above for the Lemosho Route map

The Lemosho Route (incorrectly called the Shira Plateau route by some agencies) is our favourite of the official trails on Kilimanjaro, a lengthy yet gentle (by Kilimanjaro’s standards!) trail that offers both exceptional chances of seeing wildlife and a higher than average chance of reaching the summit.

As explained in the introduction, there are several alternative routes that you can take on this, the longest trail on the mountain (The exact length, of course, depends on which of these variations you choose though to give you an idea it’s 42.26km ascent only if heading via the Cathedral, though it’s only 32.8km if taking the direct route to Shira Huts and then the Western Breach; the Mweka descent is 20.6km from summit to civilization. The following itinerary points out where these deviations from the straightest, quickest route can be found.

For this itinerary we take the Western Breach approach to the summit; for details of the standard and more popular route via Barranco, please see the Machame trail (from the end of Day 3, at Lava Tower, to the end). Note, too, that this itinerary is for seven days whereas most treks on the Lemosho Route take 8 days, especially if heading using the Barafu Route ascent 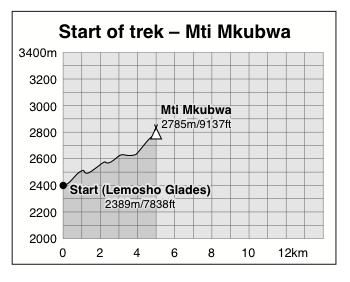 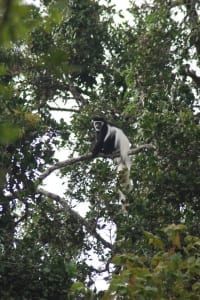 Following a fairly lengthy drive we arrive at the strange fortified village of Londorossi, where we register, pay the park fees – and where the porters have their luggage weighed to ensure that they are not carrying more than the specified maximum. We then drive on to the start of the trek, on the edge of the forest.

The whole of the first day’s trek is spent in some of the most pristine and beautiful to be found anywhere on the mountain. Given the rather isolated nature of this route, which sees relatively few tourists, encounters with wildlife on this trail are greater than on most other routes. We will also see some of Kilimanjaro’s more unusual flora, including the beautiful red impatiens Kilimanjarii, one of the great emblems of the mountain.

Our first day ends at Mti Mkubwa, the Big Tree Camp (2785m), where, as with every night on the trek, you will arrive to find your tent already erected and a snack awaiting. A full dinner follows before we settle down to sleep to the sounds of the forest, with monkeys calling and the noisy turaco bird in this most blissful of locations, underneath the spreading branches of a beautiful old podocarpus tree. 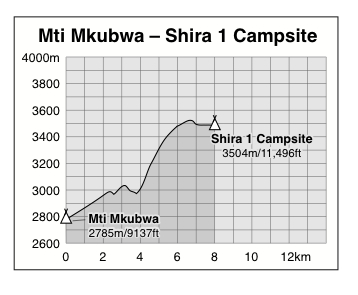 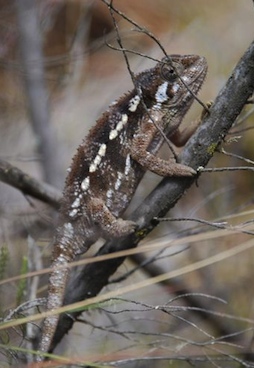 This second day, the most varied on the trek, starts off with a continuation of yesterday’s march through the forest. Before long, however, we leave the trees behind to enter the grasses and wild flowers of the Heath and moorland zone. Note how, already, your guide has started to set a deliberately slow pace, in order to help you acclimatize to the lack of air pressure at this altitude.

Still climbing, we eventually round the northern slopes of the Shira Ridge – Kilimanjaro’s little-known third summit – and pause to admire our glimpse of our destination, the magnificent snow-covered Kibo summit.

Descending a short distance, we arrive at our second campsite, the Shira One Campsite (3504m), on the western edge of the Shira Plateau, with views across the plateau to Kibo. 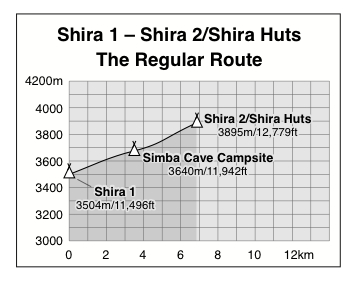 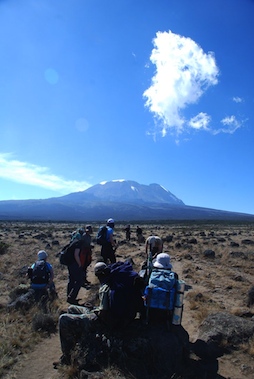 For this third day we could just cut a straight path across the plateau towards Kibo, but if you have the energy a wonderful morning can be spent exploring some of the features of the Shira Ridge, including the Cathedral, from where we get great views across the plateau towards Kibo and along the southern slopes of Kilimanjaro. It is also extremely useful for acclimatizion as we climb steadily to 3720m before descending back to the plateau. We then continue east towards Kibo, eventually reaching the Shira Huts Campsite (3895m) at the heart of the plateau. 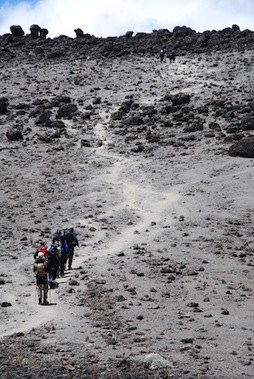 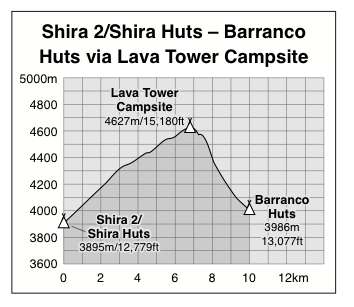 The day begins with a slow march directly towards Kibo. The flora becomes more scarce now as we climb ever higher, with only a few everlastings, like living pot pourri, decorating the path. It’s a long walk but a very photogenic one with the snowy summit of Kilimanjaro a constant looming presence ahead.

We are now heading into some serious altitude, with Lava Tower, at the foot of Kibo, our next destination, standing at 4530m above sea level. If we were planning on continuing onto Barranco this evening in all probability we would take lunch near the Lava Tower. For your trek after lunch to the summit and back down to Mweka Gate, please follow the itinerary laid out in the Machame Route ( afternoon of Day 3 onwards).

For us who plan to climb via the Western Breach, we will camp at Lava Tower, and maybe enjoy a little excursion up it before dinner if we feel up to it. Hopefully, any altitude sickness we may be feeling now is relatively minor – because from now on it’s all uphill. 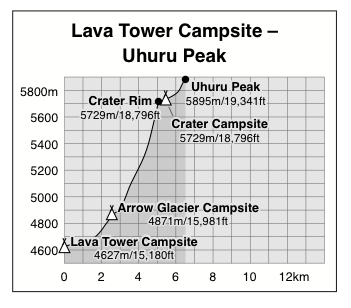 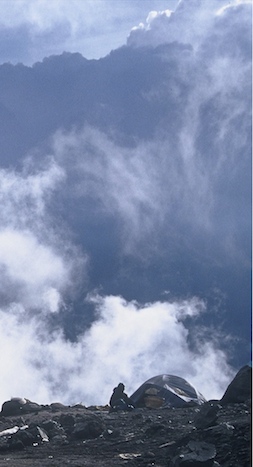 By our reckoning this particular leg, even if taken pole pole, lasts little longer than 75 minutes, yet it’s not unusual for trekking agencies to set aside an entire day for it. In one respect this seems a little over-cautious and does lead to a situation where, that hour aside, you’ll be spending the rest of your day freezing your butt off inside your tent. On the other hand, it’s a good idea to take your time at this altitude. After all, save for the Crater Camp this is the highest place where we can pitch your tent on the mountain (the altitude of Arrow Glacier Campsite being 4871m); and that kind of altitude should always be taken seriously.

Furthermore, the walk, though only 75 minutes or so in duration, is still quite exhausting, it being uphill all the way. You begin by crossing a stream or two (one of which, Bastions Stream, runs below Lava Tower) before climbing steeply in a south-easterly direction to Arrow Glacier.

Engulfed by avalanches and often subject to the vagaries of the extreme conditions up here, this place has always been a bit of a mess and little has changed.  Let’s console ourselves with the thought that, assuming that we’re not spending a night on the summit, we probably won’t be spending a full night here but should be away by 2am. Happy Camping! Though we’ve talked as if there is one set path from campsite to crater rim, this isn’t actually the case; the path changes as snow and rockfalls dictate. Whatever route we take, rest assured it will be steep, and it will be exhausting. Our guide will doubtless aim for the rocky ridge that you can see from Arrow Glacier Campsite which runs from the rock towers near the crater down towards the camp (and is often called the ‘Stone Train’). From there we hit the Rock Stairs – natural steps that, after the shifting scree and rocks that we’ve just walked on, come as something of a relief. These stairs are also viewed as a ‘Point of No Return’ by the porters who, once they see that you’ve reached here, consider there’s no turning back and thus break camp and march off to Mweka (unless you’re planning to sleep at Crater Camp, of course, in which case they’ll be right behind you).

The trail now picks its way between the rocky towers crater before finally gaining the crater rim (5729m), with Furtwangler Glacier on our left the first of many spectacular sights up here. Walking on level ground for a change, Crater Campsite (also 5729m), set amongst boulders at the foot of the climb up to Uhuru, is just 10 minutes away. From here, the stiff switchback climb up to Uhuru Peak takes 50 minutes, the path clearly etched into the crater wall. It’s a hard climb and you’ll be cursing every zigzag and switchback on the way. But keep going: the sense of achievement at the top is beyond compare. And it’s a feeling that will stay with you all the way down, and all the way back to your home country. Because if you get to the summit, you’ll believe you can do anything.

Oh, to be able to bottle that feeling… 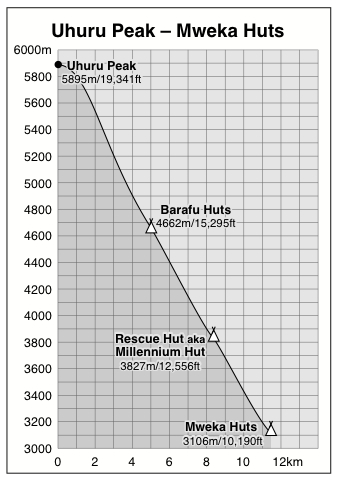 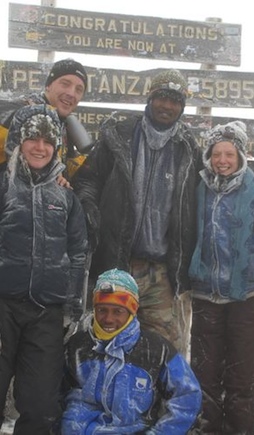 After a rest at the top, we continue to Barafu Camp, take breakfast and relax for an hour then continue our march down the mountain on the Mweka Trail. Today’s walk takes us back down through the alpine desert, heath and moorland zones until we once more enter the forest zone via Millennium Camp (3827m). There, amongst the trees, we find the Mweka Campsite (3106m), our final stop on the trek. We should arrive there at about 4pm – and you have been walking for around 16 hours, less breaks! Exhausting but, if you made it to the top, you’ll think it was worth it! 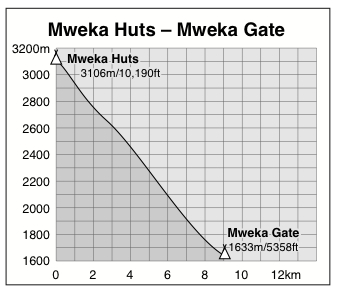 It’s just a couple of hours further now from the campsite to Mweka Gate (c1633m), where those who made it to the summit or Stella Point will collect their certificates. A car will be waiting to take you back to your hotel, and a land of warm showers and cold beers. Your trek is at an end.