It is said that to climb up Kilimanjaro is to walk through four seasons in four days. It is true, of course, and nowhere is this phenomenon more apparent than in the flora of Kilimanjaro.

In other words, it is Kilimanjaro’s plants which most accurately reflect the changes in temperature and conditions as you climb.

The sheer variety of flora on Kilimanjaro can be ascribed in large part to the mountain’s tremendous height. It’s also in part due to its proximity to both the equator and the Indian Ocean. Add to this the variations in climate, solar radiation and temperature from the top of the mountain to the bottom, and you end up with the ideal conditions for highly differentiated and distinctive vegetation zones. 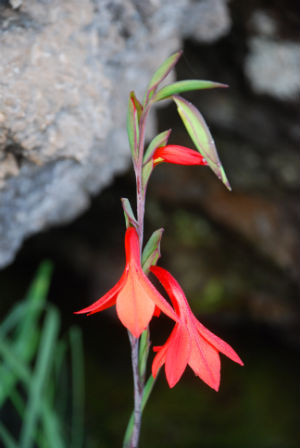 Cultivated zone and forest (800m-2800m): where the flora on Kilimanjaro thrives!

There are other reasons for lumping them together, however. Because both zones receive the most rainfall of any ecological zone. Indeed, on average they receive about 2300mm per year. The forest zone also houses the greatest variety of both fauna and flora on Kilimanjaro.

The star of the montane forest zone, however, is the beautiful flower Impatiens kilimanjari. This endemic fleck of dazzling red and yellow grows in the shape of an inch-long tuba. You’ll usually see them by the side of the path on the southern side of the mountain.

Vying for the prime real estate between the roots of the trees are other, equally elegant flowers. Flowers such as the beautiful violet Viola eminii and Impatiens pseudoviola. 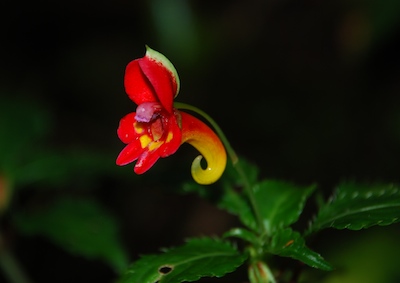 UN calls for Kilimanjaro’s slopes to be reforested >>

These two zones overlap. Together they occupy the area immediately above the forest from around 2800m to 4000m. Collectively they form what is known as the low alpine zone. Temperatures can drop below 0°C up here. Most of the precipitation that does fall here comes from the mist that is an almost permanent fixture at this height.

Immediately above the forest zone is the heath, where rainfall is around 1300mm per year. Grasses now dominate the mountain slopes, picked out here and there with some splendid wild flowers. Among them are the yellow-flowered Protea kilimandscharica. There is also a flower that many readers will recognise instantly – the back-garden favourite Kniphofia thomsonii, better known to most as the red-hot poker.

Climb ever further and you’ll soon reach the imperceptible boundary of the moorland zone. This zone tends to have clearer skies but an even cooler climate. Furthermore, average per annum precipitation is now down to 525mm.

The cooler conditions mean that the flora on Kilimanjaro is less abundant. And it’s also less varied. But it’s still impressive. The most distinctive plant in this area, indeed, on the entire mountain, is the senecio, or giant or tree groundsel. Groundsels tend to favour the damper, more sheltered parts of the mountain. It’s for this reason that you’ll see them in abundance near the Barranco Campsite. But they appear in many smaller valleys and ravines all round the mountain, and particularly on the southern slopes. 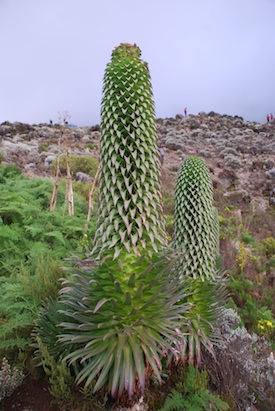 Sharing roughly the same kind of environment is the strange lobelia deckenii. This is another endemic species. By the way, it bears no resemblance to the lobelias in your hanging baskets back home.

By the time you reach the Saddle, the flora on Kilimanjaro starts to disappear. Only three species of tussock grass and a few everlastings can survive here. This is the alpine desert, where plants have to cope with drought conditions. Because precipitation here is less than 200mm per year.

They also have to put up with both inordinate cold and intense sun, usually in the same day. Yet survive they do. For up to about 4700m you’ll also find the Asteraceae, a bright yellow daisy-like flower and the most cheerful-looking organism at this height.

Once you get onto the snowy wastes near the summit, there’s very little flora on Kilimanjaro. On Kibo, almost nothing lives. Why? Because, to put it simply, there is virtually no water. On the rare occasions that precipitation occurs, most of the moisture instantly disappears. Because it either dribbles away into the porous rock or is locked away in the glaciers.

That said, specimens of Helichrysum newii have survived in the Reusch Crater, 5760m above sea level. They were living by a fumarole, which presumably gave them enough heat. This is an everlasting that truly deserves that name. Lichen, too, is said to exist right up to the summit. 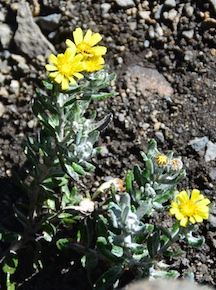 These lichens may not be the most spectacular of the plants on Kilimanjaro. But they do hold a record of sorts. Due to the harsh conditions, their growth rate at the top is just 0.5mm in diameter per year. For this reason, scientists think that the larger lichens on Kilimanjaro could be amongst the oldest living things on Earth. Indeed, some scientists say they could be hundreds and possibly thousands of years old!