Note that this is a general look at Kilimanjaro’s weather and climate. Please follow this link for specific advice on when to climb Kilimanjaro.

Kilimanjaro is big enough to have its own weather pattern

The theory behind this pattern is essentially very simple. Strong winds travel across the oceans, drawing moisture up as they go. Eventually they collide with a large object – such as a mountain like Kilimanjaro. The winds drive upwards as they hit the mountain slopes, and the fall in temperature and atmospheric pressure leads to precipitation or, as it’s more commonly called, snow and rain. 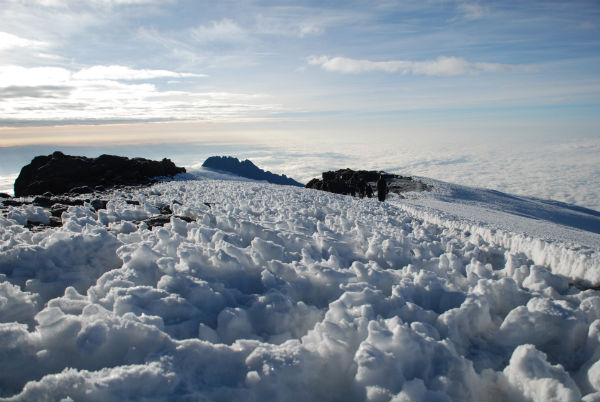 The ‘trade’ and ‘anti-trade’ winds of Kilimanjaro

In any one year there are two rain-bearing seasonal winds buffeting Kilimanjaro. The south-east trade wind bringing rain from the Indian Ocean arrives between March and May. Because the mountain is the first main obstacle to the wind’s progress, and by far the largest, a lot of rain falls on Kili at this time. For this reason, we call the March-to-May season the long rains. This is the main wet season on Kilimanjaro. As the south-east trade winds run into the southern side of Kili, so the southern slopes tend to be damper and as a consequence more fertile, with the forest zone much broader than on the northern slopes. 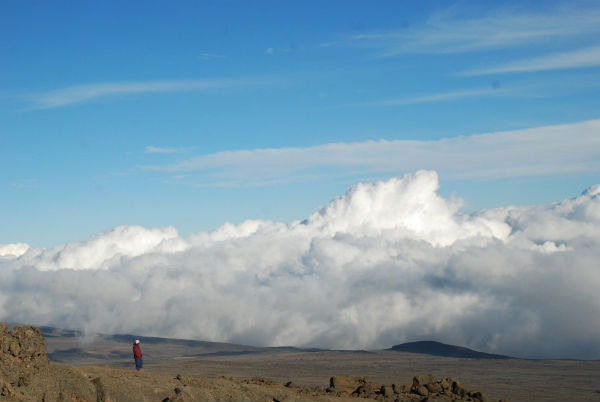 Clouds being held below the Saddle by the anti-trade winds

Then there are the dry ‘anti-trade’ winds from the north-east which carry no rain and hit Kilimanjaro between May and October. These anti-trade winds, which blow, sometimes very strongly, across the Saddle (the broad valley between Kilimanjaro’s two peaks), also serve to keep the south-east trade winds off the upper reaches of Kilimanjaro, ensuring that the rain from the long monsoon season stays largely on the southern side below 3000m, with little falling above this.

This is why, at this time of year, the first day’s walk for trekkers following the Marangu, Umbwe or Machame routes is usually conducted under a canopy of cloud, while from the second day onwards they traditionally enjoy unadulterated sunshine.

A second seasonal rain-bearing wind, the north-east monsoon, having already lost much of its moisture after travelling overland for a longer period, brings a short rainy season between November and December (though it can continue to February). While the northern side receives most of the rain to fall in this season, it is far less than the rain brought by the south-east trade winds (the ones that bring the rain in April-May), and as a result the northern side of the mountain is far drier and more barren in appearance. Once again, the rain falls mainly below 3000m.

While few people choose to visit Tanzania in the low season, it is still possible; please visit the following link for opinions on climbing Kilimanjaro in the rainy season.

So how did Kilimanjaro’s glaciers get there? 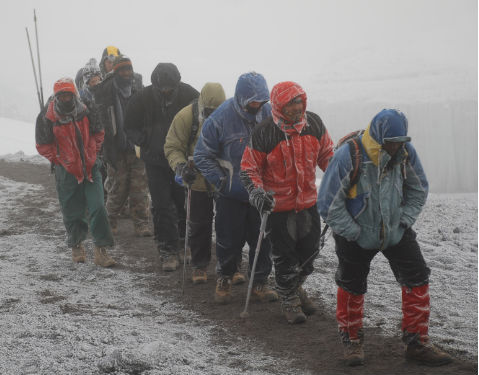 Experiencing the effects of the anti-trade winds first-hand on the summit Kibo!

This model of Kilimanjaro weather does pose a tricky question: if the precipitation falls below 3000m, how did the snows on the summit of Kibo get there in the first place? The answer, my friend, is blowing in the (anti-trade) wind: though these winds normally blow very strongly, as those who walk north across the Saddle will testify, they occasionally drop in force, allowing the south-east trade winds that run beneath them to climb up the southern slopes to the Saddle and on to the summit. Huge banks of clouds then develop and snow falls.

This, at least, is the theory of Kilimanjaro’s climate. In practice, of course, the mountain is rarely so predictable.

Current weather for the Kilimanjaro region From wunderground.com