What do you eat on Kilimanjaro?

It’s important that you take some time to consider what you’re going to eat on Kilimanjaro. In particular, remember to tell your agency if you have any special dietary requirements. This is important because both meat and nuts form a substantial part of the food on Kilimanjaro.

One of the marvels of a trek on the Roof of Africa is the skill with which the cooks can conjure up tasty and nutritious food. That they manage to do this despite the restrictions on both equipment and ingredients is amazing. Even birthday cakes are possible (without an oven, remember!)

They are also able to obey almost any dietary restrictions, so that vegans, vegetarians, gluten and lactose intolerants are all catered for. In addition, those with restrictions due to their religious beliefs are also accommodated. All you have to do, if you have any sort of dietary requirements, is to tell your company in advance. 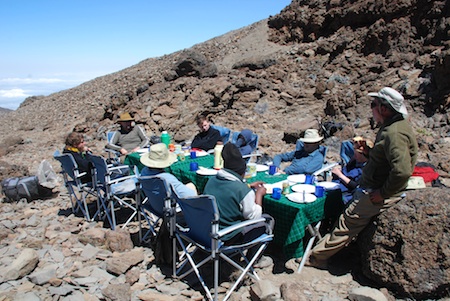 A typical Kilimanjaro breakfast will involve porridge, eggs (boiled or fried), a saveloy and possibly some tomatoes or beans too. Alongside these items there’ll also be a piece of fruit such as a banana or orange. Bread with jam, honey or peanut butter and a mug or two of tea, hot chocolate or coffee are also served. 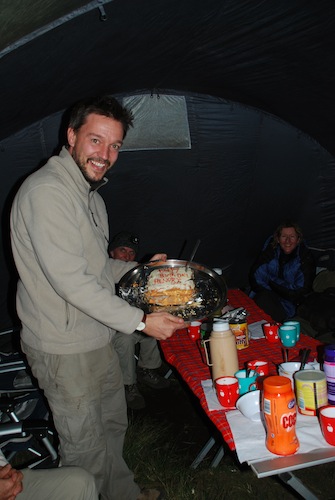 Typically you’ll take lunch on Kilimanjaro at a pre-designated spot halfway through the day’s walk. Those on more expensive treks will often have their lunch cooked on the spot by their crew, who will have rushed ahead of you to set up the mess tent and prepare the food. KINAPA do occasionally try to stop trekking operators from making cooked lunches along the trail for environmental reasons, but with little success so far.

Alternatively, those trekking with a budget company will carry a packed lunch which your crew prepared at breakfast. This packed lunch often consists of a boiled egg, sandwiches, a banana or orange, and all washed down with tea or coffee provided by the guide from a flask.

The final and biggest meal of the day, dinner, usually begins with soup. Main course then follows, typically including chicken or meat, a vegetable sauce, some cabbage, and rice or pasta. If your porters have brought up some potatoes, these will usually be eaten on the first night as they are so heavy.

Your stomach still hasn’t finished for the day, for the evening is then rounded off by pudding, which is usually some more fruit.

Snacks and other food on Kilimanjaro

The three main meals, however, are not the only food on Kilimanjaro that your crew will serve to you. Because at the end of each day’s walking, you’ll arrive to find they have already set up your tents. What’s more, shortly after you arrive they will then serve you afternoon tea, which usually consists of biscuits, peanuts and, best of all, salted popcorn.

Bring your own sweets!

As we mention elsewhere on the site, it’s important to bring your favourite sweets from home. When you’re feeling at your lowest, the restorative powers of a chocolate bar, a simple boiled sweet or some other confection shouldn’t be under-estimated.

Often when I’m making that final push to the summit, I like to imagine I’m at home anyway. Why? Well, for no other reason than that it takes me away from the pain and the cold that I am feeling at that moment. And a simple orange-flavoured fruit pastille helps me get there, and get there quickly. Indeed, while we’ve spent a long time talking about the meals the crew makes for you, the snacks you bring may actually be the most important food that you eat on Kilimanjaro.

But one word of warning: don’t arrive in Tanzania thinking that you’ll find your favourite sweet on sale here. Because the chances are you won’t. And if you do, it’s highly unlikely that it will taste the same as the treats you get at home. The chocolate you buy in Tanzania, in particular, tastes different (and inferior) to the chocolate you buy at home. (I’m told this is because they put something in the chocolate to stop it melting, which makes sense, but it’s still a big disappointment.)

<< On The Mountain | Drink on Kilimanjaro >>