You’ve spent thousands buying flight tickets and booking your trek. But what have you actually signed up for? What’s it like climbing Kilimanjaro?

Well, the first thing to say is that it’s fun. It really is. Sure, the last push to the summit is hard, as some of the quotes we use in the guide book clearly indicate. But don’t let that put you off: Kilimanjaro is a delightful mountain to climb.

But we had much to compensate us for all we had to give up. The charm of the mountain scenery, the clear, crisp atmosphere, the tonic of ‘a labour we delight in’ and the consciousness now and again of success achieved, all went far to make our fortnight’s arduous toil a happy sequence of red-letter days. Hans Meyer, the first man to reach the summit of Kilimanjaro; quoted from his book Across East African Glaciers

After all, the days are spent walking through spectacular landscapes which change every day. And as you pass through different vegetation zones, the pace is never exhausting. Why? Well, because you have to walk slowly in order to give yourself a chance to acclimatize.

It’s not just about the walking

What’s more, at the end of the day, while the guides are cooking your dinner, you are free to wander around the campsite. And as you bump into the same people time and again over the course of the trek, a sense of community soon develops.

Then, at around 7pm, night falls. And as you tuck into the huge plates of food cooked by your crew, the stars come out, stunning everyone into silence. This is the favourite time of day for most people. Rested, replete with food and with a day of satisfactory walking behind and a good night’s sleep ahead, it’s natural to feel a sense of comfort and contentment. While the thought of wild animals possibly lying nearby serving to add a pleasing frisson of excitement.

Bed? It’s too early. I feel too good. Aaah, I wonder if there’ll ever be another time as good as this.
Gregory Peck, in the film version of The Snows of Kilimanjaro

It’s tough. But it’s not always tough. And more often than not, it’s enjoyable rather than tough.

Of course, walking up from around 1800m to 5892.55m or thereabouts does take a lot of effort. Indeed, the night walk to the summit of Kilimanjaro is unarguably tough. But short of actually carrying you up, your crew does everything in their power to make your entire experience as comfortable as possible. (That’s assuming you have signed up with a decent agency such as Kilimanjaro Experts, of course.)

In fact, they’ll spoil you. They carry your bag, of course. Then, at the end of the day’s walk ,you’ll turn up at camp to find your tent has already been erected already. What’s more, there’ll be a bowl of hot water lying nearby for you to wash away the grime of the day. A few minutes later and a large plate of popcorn and biscuits will be served with a mug of steaming hot tea or coffee.

So don’t worry about how you’ll cope on Kili. Sure, you do have to be careful about altitude sickness. But when it comes to living on the mountain, your crew will try to make it as comfortable and relaxing as possible. Which allows you to get on with the job of actually climbing the mountain!

<< On The Mountain | Sleeping on the mountain >> 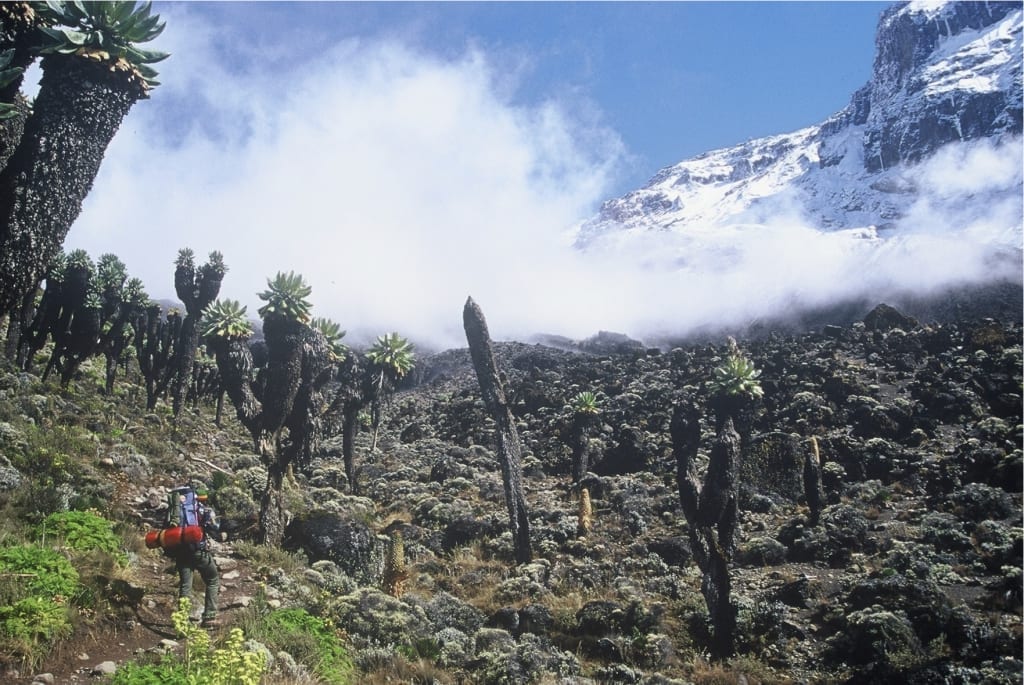 Other pages in this section

Minimise Your Impact While Trekking >>

Overnight accommodation on the mountain >>

Food on the mountain >>

Drink on the mountain >>

What to put in your daypack when trekking >>

About the porters on Kilimanjaro >>

We have divided it into four main sections, which together provide you with all the basics you need to know to plan and prepare properly for your Mount Kilimanjaro trek:

Information about the history, geography, geology, flora and fauna of the mountain. Not essential, but (hopefully) interesting.

Vital information for anyone planning a trek, from when to go to the best route to take and what to pack.

What’s it like on the mountain? What do you eat? Where do you sleep? Who’s in your crew? How much should you tip?

Information for those looking to explore the country in greater depth, with plenty of useful info for Kili trekkers too.

In addition, you’ll also find details of our own climbing outfit, Kilimanjaro Experts, where all my favourite guides, cooks and other mountain crew staff that I’ve climbed with over the past two decades have been gathered into one great value, ethically-minded company.

Still want more info? Well you can’t beat our bestselling guide book, which provides comprehensive advice on climbing, including REVIEWS OF ALL THE MAJOR TREKKING COMPANIES. You’ll also find guides to the towns and cities that will act as the base for your trek, plus, of course, detailed descriptions of all the routes on both Kili and Meru, written by somebody who has climbed them all. Many times. The book has now been published since 2001 and is currently in its fifth edition.

Oh, and I don’t think we’ve mentioned our blog yet, which has all the latest news from the mountain and lots of useful advice.

And if you still can’t find the information you require, then just email us. We can be reached at henry@climbmountkilimanjaro.com or henry@kilimanjaroexperts.com and I’ll be happy to help in whatever way I can.