The porters on Kilimanjaro are an incredible breed of men. (And the ones who work on Kili are largely – though not exclusively – male.) The youngest porters on the mountain are about 18, which is the minimum legal age. (Though I must say that some look a good deal younger.) At the other extreme, they usually stop working on the mountain at about 40, though occasionally they can be much older.

They are, without doubt, amongst the hardest workers on Kilimanjaro. To see them traipsing up the mountain, water in one hand, cooker in another, rucksack on the back and picnic table on the head, is staggering to behold. And though they are supposed to carry no more than 15kg, many, desperate for work in what is an over-supplied market, carry much, much more. 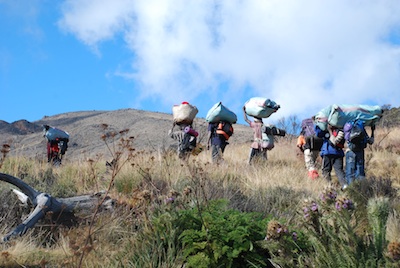 Porters on the Rongai Route

And that’s not all. At the end of the day’s walk, the average trekker spends his or her time at camp moaning about the hardships they are suffering. It’s a lamentation that is usually performed while cramming down mouthfuls of popcorn while clasping a steaming hot cup of tea.

Meanwhile, those hardy porters are putting up the tents, helping with the preparation of the food, fetching more water and generally making sure every trekker’s whim is, within reason, catered for.

Surprisingly, the porters on Kilimanjaro are not immortal

Yet in spite of appearances to the contrary, porters are not indestructible. Though they rarely climb to the summit themselves, a few still expire each year on the slopes of Kilimanjaro.

The most common cause of death is exposure. This is perhaps unsurprisingly given the ragged clothes many wear. For this reason, if you see a porter dozing on the wayside and it’s getting a bit late, put aside your concerns about depriving him of some much needed shut-eye and wake him up. Many are the tales of porters who have perished on Kilimanjaro because they took forty winks and then couldn’t find their way back to camp in the dark.

It’s this kind of horror story that has caused so much concern over recent years and led to the formation of organizations such as the Kilimanjaro Porters Assistance Project.

How many porters do you need on Kilimanjaro?

The first question regarding porters on Kilimanjaro is: how many do you actually need? This issue won’t actually concern many people, for agencies typically work this out for you. Those looking to save every last shilling, however, often ask the agency to cut down on the number of porters.

But this is not easy. Furthermore, given that the cost of a porter’s wages is usually less than the food bill, it’s not a particularly brilliant idea either. Remember that even if you do carry your own rucksack, there is still all the food, cooking equipment, camping gear and so forth to lug up the mountainside. Then there is the guide’s rucksack too, for which he will expect you to hire a porter. What’s more, you’re also tempting the agency to overload each porter in order to reduce their total number – which is, of course, illegal.

Three porters for every trekker is not unusual

So, in general, accept the agency’s recommendations on the number of porters. As a general rule, the larger the number of trekkers, the less porters per person required. On most routes, where you sleep in tents, two to three porters per person is the norm. Take the Marangu Route, however, where no tent is required, and you can probably get away with about two per trekker. And even less if the group is large.

Just for the record, and in case taking porters up a mountain makes you feel a little less virile, you may like to know that the great Count Teleki (who attempted to climb the mountain in the nineteenth century) took no less than 65 of them up the mountain with him!)

How much should you pay your porters on Kilimanjaro? 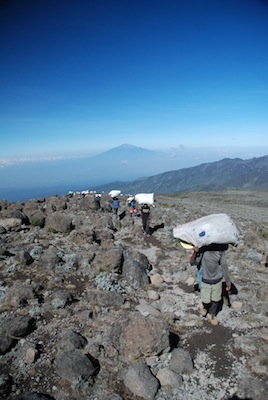 The porters’ wages on Kilimanjaro are paid by the agency you sign up with. All you need to worry about is how much to give them as a tip at the end of the trek.

Given the privations they suffer over the course of an average trek and their desultory wages, their efforts to extract as much money as possible from the over-privileged mzungu (Swahili for ‘white person’) is entirely forgivable.

One elaborate yet common method is for the porters to pretend that there are more of them than there actually are. This technique is actually a lot easier to achieve than you may think. This is because of the vast numbers of porters running around each campsite. That, and the fact you don’t actually walk with them on the trail.

The practise of adding ‘fictitious’ porters to their group is called ‘kirunje’, which is Swahili for ‘shadow’….

John Reader described the technique of Kirunje succinctly by in his excellent 1982 book, Kilimanjaro:

I hired four porters for part of my excursion on Kilimanjaro. The fourth man’s name was Stephen, or so the other three told me. I never met Stephen himself. Our gear seemed to arrive at each campsite without his assistance and I am not aware that he ever spent a night with us. I was assured that he was engaged elsewhere on tasks essential to the success of my journey, but I occasionally wondered whether Stephen actually existed. I was particularly aggrieved when he failed to collect his pay in person at the end of the trip. The other guides collected it for him. They also collected his tip.

This sort of thing shouldn’t happen if you’re with a reputable company. Nevertheless, it’s a good idea to make sure you meet your team at the start of the trek. This will help to prevent this sort of scam, and it’s good manners too. While at the end, to ensure each porter gets his fair share, dish the tips out yourself – do not give them to your guide to hand them out on your behalf; see the KPAP link for why this is so.

Porters struggling up the slopes

Please note that however much money you lavish on them at the end, the porters’ reaction will always be the same. Simply put, porters are not above play-acting, in the same way that the sea is not above the clouds. On being given their gratuity all porters will grimace, sigh, tut and shake their head. They may then roll their eyes in disgust and stare at the money in their hand in disbelief.

In short, they will accept your tips with all the gratitude of one who has just been handed a warm jar of the contents of the camp’s toilets. A few of the more talented ones may even manage a few tears. Nevertheless, providing you have paid a reasonable tip, don’t fall for the melodramatics. (And for guidance over what exactly is the correct amount, see the Tipping section.) Instead, just thank them warmly for all their endeavours over the course of the trek. Once they realize your conscience remains unpricked it will be all handshakes and smiles. Then, having trousered the money, they’ll soon trot off happily enough.

Can you climb without porters? >>

<< On The Mountain | Your Kilimanjaro crew: Trekking Guides >>