The history of Kilimanjaro: The 1800s – The Pioneers…

With British merchants firmly established on Zanzibar by the 1840s, frequent rumours of a vast mountain situated on the mainland just a few hundred miles from the coast now began to reach European ears. British geographers were especially intrigued by these reports, particularly as it provided a possible solution to one of the oldest riddles of Africa: namely, the precise whereabouts of the source of the Nile. Encisco’s sixteenth-century reference to the Mountains of the Moon in which are the sources of the Nile (see previous page) is in fact a mere echo of the work of Ptolemy, writing fourteen hundred years before Encisco, who also cites the Mountains of the Moon as the true origin of the Nile.

But while these Mountains of the Moon were, for more than a millennium, widely accepted in European academia as the place where the Nile rises, nobody had actually bothered to go and find out if this was so – nor, indeed, if these mountains actually existed at all.

Interest in the ‘dark continent’ was further aroused by the arrival in London in 1834 of one Khamis bin Uthman. Slave dealer, caravan leader and envoy of the then-ruler of East Africa, Seyyid Said, Uthman met many of Britain’s leading dignitaries, including the prime minister, Lord Palmerston. He also met and talked at length with the leading African scholar, William Desborough Cooley. A decade after this meeting, Cooley wrote his lengthy essay The Geography of N’yassi, or the Great Lake of Southern Africa Investigated, in which he not only provides us with another reference to Kilimanjaro – only the fifth in 1700 years – but also becomes the first author to put a name to the mountain:

“The most famous mountain of Eastern Africa is Kirimanjara, which we suppose, from a number of circumstances to be the highest ridge crossed on the road to Monomoezi.”

Suddenly Africa, long viewed by the West almost exclusively in terms of the lucrative slave trade, became the centre of a flurry of academic interest and the quest to find the true origins of the Nile became something of a cause célèbre amongst scholars. Long-forgotten manuscripts and journals from Arab traders and Portuguese adventurers were dusted off and scrutinized for clues to the whereabouts of this most enigmatic river source. 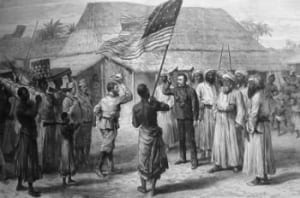 Most scholars preferred to conduct their research from the comfort of their leather armchairs; there were others, however, who took a more active approach, and pioneering explorers such as Richard Francis Burton (above left) and John Hanning Speke set off to find for themselves the source of the Nile, crossing the entire country we now know as Tanzania in 1857.

This was also the age of Livingstone and Stanley, the former venturing deep into the heart of Africa in search of both knowledge and potential converts to Christianity, and the latter in search of the former.