Unsurprisingly for a people that has been subjected to some pretty relentless missionary work for over a century, the majority of the Chagga are today Christian. Traditional beliefs are still held by some in rural areas, though the intensity of the beliefs and the excesses of many of the rituals have largely disappeared. Superstition played a central role in traditional Chagga religion: witchcraft (wusari in Chagga) played a major part, rainmakers and rain-preventers were important members of society, and dreams were infallible oracles of the future; indeed, many Chagga were said to have dreamt of the coming of the white man to Kilimanjaro. 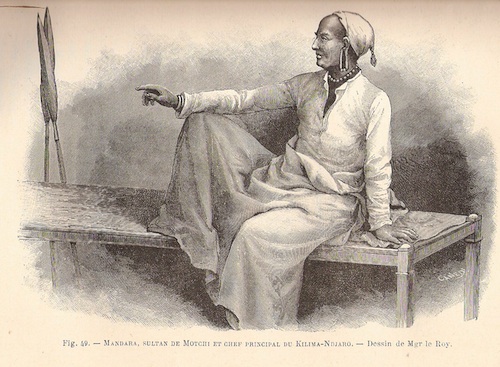 The Chagga Chief Mandara, the scourge of many European explorers

The traditional faith was based around belief in a god called Ruwa. Ruwa was a tolerant deity who, though neither the creator of the universe nor of man, nevertheless set the latter free from some sort of unspecified incarceration. Ruwa had little to do with mankind following this episode, however, so the Chagga insteadworshipped their ancestors, whom they believed could influence events on Earth.

Chagga mythology had many parallels with stories from the Bible, including one concerning the fall of man (though in the Chagga version, a sweet potato was the forbidden fruit, and it was a stranger rather than a serpent that persuaded the first man to take a bite); there are also stories that bear a resemblance to the tales of Cain and Abel, and the great flood.

The Chagga faith also had its own concept of sin and their own version of the Catholic practice of confession. In the Chagga religion, however, it is not the sinner but the person who is sinned against who must be purified, in order that the negative force does not remain with him or her.

This purification would be performed by the local medicine man, with the victim bringing along the necessary ingredients for performing the ‘cleansing’. These included the skin, dung and stomach contents of a hyrax; the shell and blood of a snail; the rainwater from a hollow tree and, as with all Chagga ceremonies, a large quantity of banana beer for the medicine man. All of this would then be put into a hole in the ground lined with banana leaves and with a gate or archway built above, which the victim would then have to pass through. This done, the victim would be painted by the medicine man using the mixture in the hole. This entire ceremony would be performed twice daily over four days.

Medicine men did more than care for one’s spiritual health; they also looked after one’s physical well-being. For the price of one goat and, of course, more banana beer, the medicine man would be able to cure any affliction using a whole host of methods – including spitting.

If you were suffering from a fever, for instance, you could expect to be spat upon up to 80 times by the medicine man, who would finish off his performance by expectorating up your nostrils and then blowing hard up each to ensure the saliva reached its target. For this particular method, the traditional payment was one pot of honey – and probably some more banana beer.

Traditional Chagga society also practised preventative medicine, and not just in matters of health. If, for example, a prominent man in the village was for some reason worried about his own safety, the medicine man would order him to lie with his favourite wife in a pit dug in the ground. With the man and wife still inside, the hole would then be decked with poles and covered with banana leaves. They would remain there until evening, while the man’s friends above would cook food.

Medicine men also performed the vital role of removing curses. Curses took many forms: a cheated wife, for example, might curse her husband by turning her back on him, bowing four times and praying for his death.

The most feared curse, however, was that of the deathbed curse, issued by somebody shortly before they expired. These were widely held to be the most difficult to reverse, for to have any hope of removing it the medicine man would require the victim to get hold of a piece of the curser’s corpse.

If the medicine man’s efforts at lifting the curse proved to be in vain, a funeral would be the most likely outcome. As with most Chagga ceremonies, this would vary slightly from place to place and from tribe to tribe, and also depended on the status of the deceased.

Only married people with children, for example, would be buried: dead youths and girls would be wrapped in banana leaves and left in a banana grove, while babies were merely covered in cow dung and left out for jackals and hyaenas. (It is said that this practice was stopped after a jackal dropped the severed head of a small baby at the feet of a local chief.)

For married adults, the corpse would be stripped and bent double, with the head and legs tied together. Animal sacrifices would take place on the day of the burial, with the hide of a sacrificed bull used to cover the grave. Interestingly, the corpse would face Kibo in the grave – as if the Chagga believed that the summit of Kilimanjaro was in some way connected with the afterlife. A lot of beer-drinking was also involved. Sacrifices would continue for the next nine days until, it was believed, the soul had finally crossed the harsh desert separating the earthly world from the spirit world. The afterlife, incidentally, was said to be very like our temporal world, only not as good, with food less tasty and the scenery less majestic.

One of the occasions in which children frequently died was during the initiation ceremony known as Ngasi. This was a brutal rite-of-passage ceremony to mark the passing of boys into adulthood.

The ceremony was presided over by the so-called King of Ngasi, a man who had the authority to viciously flog any boy taking part in the ceremony who displeased him.Before the Ngasi proper started, the boys who were to take part were summoned from their houses by the singing of lugubrious songs at the gate of their homes.From there they were taken to the place of ceremony deep in the forest and the proceedings began.

Hunting formed a large part of the Ngasi; boys were tested on their ability to track down and kill game, the animals caught being smeared with the novices’ excrement.

Another test they had to undergo was to climb a tree on the riverbank and cross the river by clambering along its branches to where they intertwined with the branches of the trees on the other side. After this, a chicken would be sacrificed and the boys ordered to lick the blood.

The final part of the initial stage was the most brutal, however: orders were secretly given to the boys to slay a crippled or deformed youth amongst their number. Traditionally, the victim was killed in the night. The parents were never actually told what had happened to their son and, as all present at the Ngasi ceremony were sworn to silence, they rarely found out the whole story.

The boys then moved to a new camp. They were now called Mbora, and were free to collect their clothes (one set of boy’s clothes, of course, was left unclaimed). They then repaired to the chief’s house for a feast, from where they headed home. 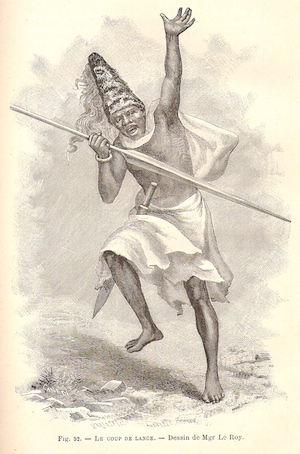 After the tribulations of the ceremony, the boys were allowed a month’s holiday, before they returned to the chief’s house to participate in the sacrificing of a bull.

They were then free to head back to their homes, raping any young women they chanced to meet on the way; the poor women themselves had no redress. The Ngasi was now at an end, and the boys who had successfully completed the ceremony were now men.

Ver hard on Wachaga to get wife, but when he get her she can make do plant corn, she make wash and cook and make do work for him. Ingreza

[English] man very much money to spend. She wife no can wash, no plant corn, herd goats or cook. All money, much merkani (cloth), heap money, big dinner. She eat much posho. She no can cook dinner. She only make ‘Safari’ and look. Porr, porr Ingreza man.

A local’s view of matrimony as recorded in Peter MacQueen’s book In Wildest Africa, published in 1910.

After the Ngasi, boys were free to marry. Marriage was arranged by the parents, though the boy and girl involved were allowed to voice their opinions – and unless the parents were particularly inflexible, these opinions would count for something. Furthermore, in order for the boy to stand a chance with his potential suitor, he had to woo her. The Chaggas’ courtship process involved, as elsewhere in the world, a lot of gift-giving, though the gifts followed a strict set of rules: spontaneity played little part in this process.

The first gift, for example, from the man to the woman, was always a necklace. The Chagga male would be well rewarded for his generosity, for traditionally in return the girl would dance naked all day with bells attached to her legs by her mother. Over the following days other gifts were exchanged until the time came when the girl, having visited all her relatives, would be shut away for three months. No work would be done by the girl during this time but instead she would be given fattening food and would be kept in a cage.

At the end of this period a dowry would be paid, the marriage ceremony performed and the bride would be carried on the back of the Mkara (the traditional Chagga equivalent of the best man) to her new husband’s house.