The social structure and village life of the Chagga

Hans Meyer notes in his book that the biggest Chagga settlement when he visited in 1889 was Machame, with 8000 people. ‘Moji’ (Moshi) had 3000, as did Marangu. Each family unit, according to him, lived in two or three extremely simple thatched huts in the shape of beehives, with a granary and small courtyard attached.

There are several examples of these ‘beehive’ huts still dotted around Kilimanjaro’s slopes. Only the chief, the head of village society and its lawmaker, lived in anything more extensive. The chief of every village was often venerated by his subjects and to meet him required going through an elaborate ceremony first. According to his report in the Church Missionary Intelligencer, Johannes Rebmann, the first white man to see Kilimanjaro, had to be sprinkled with goat’s blood and the juice of a plant and was then left waiting for four days before being granted an audience with Masaki, the chief of Moshi. While modern society has reduced his role to a largely ceremonial one, the chief is still a widely respected person in village life today — though thankfully there is now less ceremony involved when paying him a visit.

There are other similarities between the Chagga society of yesterday and today. The economy was, then as now, largely agricultural, using the environmentally destructive slash-and-burn technique for clearing land. Bananas were once the most common crop, and though banana bushes were largely replaced by coffee plantations in the early twentieth century, both are still grown today.

When it came to trading these bananas and coffee in former times, instead of the Tanzanian shilling people used red and blue glass beads as currency, or lengths of cloth known asdoti. One hundred beads were equal to one doti, with which you could buy, for example, twenty unripe bananas; twelve doti would get you a cow. 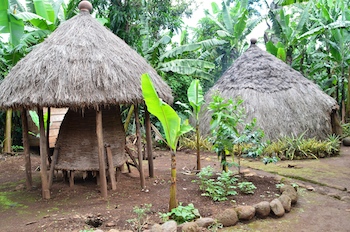 A Chagga hut and shelter at Marangu’s Chagga Museum.

<< The Chagga | Chagga Beliefs and Ceremonies >>