Skip to content
Where do you sleep on Kilimanjaro?Henry

Where do you sleep on Kilimanjaro? 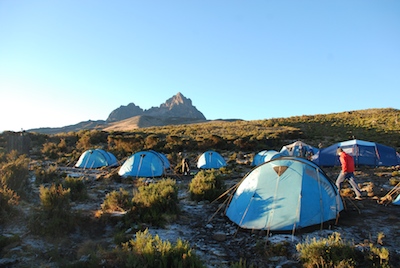 Tents on the Rongai Route

When sleeping on Kilimanjaro, you have two main options. If you are on any route except Marangu, your accommodation on the mountain will be in tents. These will be supplied by your agency/operator, and brought up by your porters. The park authorities insist that you pitch your tent only in designated campsites, so do not be tempted to sleep elsewhere, such as in any caves en route.

On the Marangu Route, camping is forbidden. Instead, all trekkers sleep in huts along the route. At first, bedding down for the night in a large room filled with strangers may seem, well, slightly weird, and even intimidating. But most people get used to the experience very quickly.

The sleeping arrangements in these huts are usually dormitory-style, with anything from four to twenty beds per room. You do see people camping on this route but they are trekkers who took the Rongai Route to ascend and are now descending on Marangu.

By the way, many of the campsites on Kilimanjaro are actually called ‘huts’ but don’t be fooled: there are no sleeping huts there. The name comes from the green shacks that stand in these campsites, which the rangers live in while working there. It used to be possible for trekkers to sleep in these huts too, but no longer.

So, in summary, it’s huts on the Marangu Route, but tents at designated campsites everywhere else. 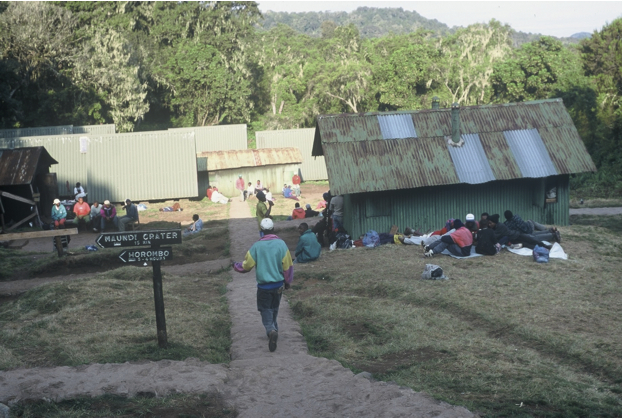 Mandara Huts on the Marangu Route

Porters and guides, however, do still sometimes sleep in them depending on the ranger’s mood and the space available.

The only other buildings you will possibly see along the trail are the toilets. These mainly follow the same design, namely a little wooden hut with a hole in the floor. Some are in better condition than others. All we will say is that some people are terrible shots, while other latrines are in desperate need of emptying before the contents rise to become Kilimanjaro’s fourth peak. For this reason, choose your latrine carefully and, more importantly, be ultra-careful when you use it too. Because you don’t want to be wearing its contents while posing for your summit photos.

What do you wear to sleep on Kilimanjaro?

The jury is out on this one. But I am of the opinion, and my colleague David agrees, that it’s much warmer to get undressed  before getting into your sleeping bag.

I know it’s not pleasant to disrobe in the cold, and, logically, it may seem wrong to get out of your clothes too. Because surely the more clothes you wear, the warmer you’ll be, no? And that goes both for when you’re inside the sleeping bag, and outside of it.

Well, I have to say that I find the opposite to be true. While I do, of course, find it to be colder initially when you get in, your body heat soon heats up the bag, whereas it take much longer for the bag to warm up if your body heat is trapped by your clothing. I do not pretend to understand the science. It’s just been my experience. So if you want a good night’s sleep on Kilimanjaro, my advice would be to remove as many layers as you can manage before getting into the bag. You’ll be glad you did.