The Germans on Kilimanjaro 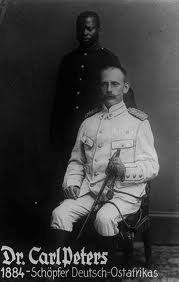 … a country as large as Switzerland enjoying a singularly fertile soil and healthy climate, … within a few years it must be either English, French or German … I am on the spot, the first in the field, and able to make Kilima-njaro as completely English as Ceylon
HH Johnston The Kilima-njaro Expedition – A Record of Scientific Exploration in Eastern Equatorial Africa (1886)

In describing the mountain thus, HH Johnston further brought Kilimanjaro to the attention of the world’s leading powers. The two great colonizers in East Africa, Germany and Britain, were already  jockeying for position in the region and British missionaries had been accused of putting the temporal interests of their country over the spiritual affairs of their flock; while for their part certain German nationals made no secret of the fact they wished to colonize Kilimanjaro.

In 1884, the Gesellschaft fur Deutsche Kolonisation (GDK), a political party founded by the 28-year old Dr Carl Peters with the ultimate goal of colonizing East Africa, persuaded a dozen local chiefs to throw off the rule of the (British controlled) Sultan of Zanzibar and, furthermore, to cede large sections of their territory to the German cause; one of Dr Peters’ envoys, Dr Juhlke, even managed to establish a protectorate over Kilimanjaro in 1885.

British fought fire with fire in response, forcing two dozen chiefs (including some of those who had sided with the Germans) to swear allegiance to the sultan – and therefore indirectly to them.

The situation was becoming dangerously volatile, with war looking increasingly likely. After further bouts of political manoeuvring, in October 1886 the two sides met in London and Berlin to define once and for all the boundary between British- and German-controlled East Africa and head off the possibility of war: the border between the British-ruled Kenya and German East Africa was now in place.