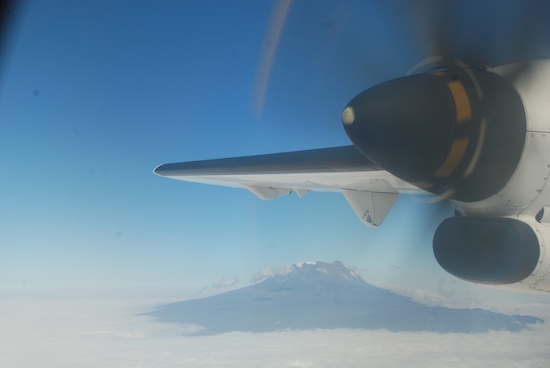 One of the gladdest moments in life, methinks is the departure upon a distant journey into unknown lands. The blood flows with the fast circulation of childhood… Dary entry of Richard Burton (the explorer, not the actor), December 1856.

Lying on the main Trans-African route from Capetown to Cairo, a few of the more adventurous types travel to Tanzania overland from Europe/South Africa. For most, however, travelling to Kilimanjaro involves flying. And you’ll find details of both alternatives on the links in this section.

Flying to Kilimanjaro, Tanzania and Nairobi

While it makes sense to look for flights to Kilimanjaro first, there are other options.

Some people fly into Nairobi, which we’ll talk about later on. What’s more, Tanzania itself has three major international airports: Dar es Salaam, Zanzibar and Kilimanjaro.

The latter, as you may expect, is the most convenient for Kilimanjaro, standing only 42km away from the mountain town of Moshi and 50km from Arusha. Recently, the number of airlines flying into KIA (the acronym for Kilimanjaro International Airport, though the three-letter international airport code is JRO) has improved considerably. Joining the three carriers who’ve ‘traditionally’ served Kilimanjaro – KLM, Ethiopian Airlines and Kenya Airways – are two new major airlines: Qatar Airways and Turkish Airlines. As a result airfares are beginning to tumble – from their previously extortionate levels. A sixth airline, Flydubai, partner of Emirates, has only added to the options.

For details on when you should book your flights, please see the following post on the cheapest time to buy your Kilimanjaro plane tickets.

Which airlines fly to Kilimanjaro?

The most popular carrier is the Dutch airline KLM. Why? Well, it’s largely because a) they fly frequently (pretty much every day in the high season) and b) they have an extensive network of regional flights in the US and UK (and Europe). All of which makes them more convenient than other airlines.

Kenya Airways have also been serving the airport for many years. Having flown with them last time, I have to say that I was impressed with their service and the quality of the plane. Given that their hub, Nairobi, is less than an hour’s flight from Kilimanjaro Airport, this also means that they will be the natural choice if you want the most direct flight (depending on where you’re flying from, of course). Furthermore, they’re pretty cheap too.

Ethiopian Airlines have also been flying to Kili for many years. They have two big selling points: 1) They’re cheap; and 2) they fly via Addis Ababa, which means you may be able to stop over and see a bit of the country – which is something everybody should do at least once in their life (it’s lovely and fascinating).

Two airlines that started flying at approximately the same time to JRO are Turkish Airlines and Qatar Airlines. The former are often the cheapest, though there is a hidden price to pay. For they tend to arrive at 1 or 2am, which means that you’ll have to pay for an extra night’s accommodation. For example, say you fly into Kilimanjaro Airport on the 2nd, you’ll actually need to book accommodation for the 1st as you are arriving so early in the morning on the 2nd. (And in case you’re wondering, you aren’t allowed to sleep in the airport).

As for Qatar Airlines, they have a good reputation for service and are popular with those flying in five the rest of Asia.

The most recent company to offer flights to Kilimanjaro Airport is flydubai. They offer about 7 flights a week from Dubai, though none on Sunday or Monday. Unfortunately, for 3-4 of their flights they arrive in the middle of the night (around 4am).  You therefore have much the problem as outlined with Turkish Airlines, above. That is to say, you can either book a room in Moshi/Arusha for that night, even though you won’t get to it until about 5-6am. Or you can just sit it out and wait to check in to your room at around midday. (For their other flights to Kilimanjaro Airport, you usually arrive around at a much more civilised 9pm.)

Despite the inconvenient flight times, these flights are proving popular as people like the airline Emirates, which of course uses Dubai as their hub.

In addition to the above there are the local airlines including Precision Air. They are a subsidiary of Kenya Airways and one that most people use to get around the rest of Tanzania and Kenya. Other airlines include Rwandair, which serves that country. Plus the local budget airline fastjet which connects Kili with Dar es Salaam and Entebbe in Uganda.

In addition, you’ll also find a swarm of smaller airlines, many connecting Kili and northern Tanzania with Zanzibar.

Kilimanjaro flight costs from the UK

Cheap flights to Kilimanjaro from London with KLM via Amsterdam will set you back a minimum of £450. This, however, can rise to £1000 in peak season. For Dar, the determined may be able to find one from around £420.

You can of course travel overland. On this website we have a whole section devoted to travelling in the area.

In addition to flights to Tanzania, you may wish to consider flights to Nairobi in Kenya. From Nairobi ‘s Jomo Kenyatta Airport it’s only a five-hour shuttle bus ride to Arusha. Nairobi is also usually rather cheaper to fly to. What’s more, it gives you the chance of taking in one of Kenya’s world-renowned game reserves. These have the not inconsiderable advantage of being cheaper when compared to Tanzania’s parks.

Note, however, that by choosing to fly to Kenya you may need a multiple-entry Kenya visa. At least, you will if you’re flying out of Kenya, too, and spend longer than a fortnight in Tanzania). For Brits and others can cost as much as £70/US$122. This, of course, will reduce or eliminate any saving you may have made in airfares. (For details of whether you will require a multiple-entry visa or can get away with a single-entry visa for Kenya, consult the guidebook.) Furthermore, there is all the extra travelling to and from Kilimanjaro to consider (though a shuttle bus is only US$30 each way to/from Arusha).

Tanzania has borders with many countries including Burundi, Kenya, Malawi, Mozambique, Rwanda, Uganda and Zambia. The Burundi border is now open again and is most easily crossed on the venerable old MV Liemba that sails to Kigoma, cutting across the northern corner of Lake Tanganyika from Bujumbura.