Global warming and Kilimanjaro: where have all the glaciers gone?

Kilimanjaro’s glaciers have shrunk by a whopping 82% since the first survey of the summit in 1912. Even since 1989, when there were 3.3 square kilometres, there has been a decline of 33%. At that rate, say the experts, Kili will be completely ice-free within the next decade or two.‘We found that the summit of the ice fields has lowered by at least 17 metres since 1962,’ said Professor Lonnie Thompson of Ohio State University. ‘That’s an average loss of about a half-metre (a foot and a half) in height each year.’ 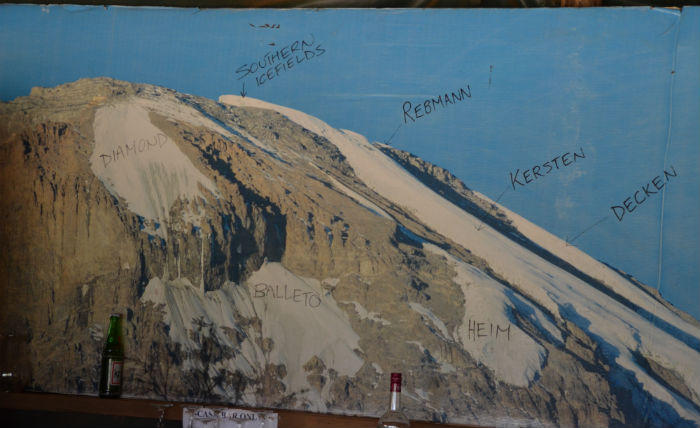 Should we be worried about Kilimanjaro’s disappearing glaciers?

The big question, therefore, is not whether the mountain’s glaciers are shrinking, but why? And should we be concerned?

Is it all due to the effect of climate change on Kilimanjaro?

Well, certainly glacial retreats are nothing new. Hans Meyer, the first conqueror of Kili, returned in 1898, nine years after his ascent, and was horrified by the extent to which the glaciers had shrunk. The ice on Kibo’s slopes had retreated by 100m on all sides. Indeed, one of the notches he had used to gain access to the crater in 1889 was twice as wide, with the ice only half as thick. (That notch, incidentally, is now called the Hans Meyer Notch.)

Nor are warnings of the complete disappearance of the glaciers anything new. In 1899 Meyer himself predicted that they would be gone within three decades. He also said the top of Kili would one day be decorated with nothing but bare rock.

What concerns today’s scientists, however, is that the current rate reduction in the size of Kili’s ice-cap is more rapid and more extensive. But is it really something to worry about? Or is it merely the latest in a series of glacial retreats experienced by Kili over the last few hundred years?

The remnants of the Furtwangler Glacier; note the gap that has opened up through its centre; this has led many scientists to predict the glacier could disappear altogether in the next 5-10 years.

Scientific studies of the glaciers

Professor Thompson and his team are attempting to find answers to all these questions. In January and February 2000 they drilled six ice cores through three of Kibo’s glaciers. By studying the cores, they could look at the history of the mountain’s climate over the centuries. (Follow this link to read a BBC report of their work.) A weather station was also placed on the Northern Icefield to see how the current climate affects the build-up or destruction of glaciers.

Although results are still coming in from Professor Thompson’s work, early indications are not good. In a speech made in February 2001, the professor declared that the summit could be completely ice-free by 2015. Thankfully, of course, those predictions haven’t quite come to fruition. But there’s no doubt that a glacier-free Kilimanjaro could occur in our lifetime. 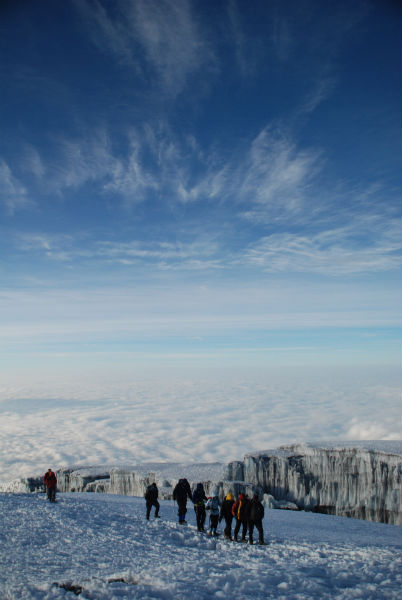 Walking past the Rebmann Glacier towards Uhuru Peak

What the future holds

Whatever the reasons, if Kilimanjaro were to lose its snowy top, the repercussions would be extremely serious. The mountain’s glaciers are essential to the survival of the local villages. Because they supply their drinking water and the water to irrigate their crops. In addition, through hydroelectric production the glaciers also supply their power.

And we haven’t even mentioned the blow to tourism that would come from the loss of the snow-cap.

And these are just the local consequences. Because what is happening on Kilimanjaro is a microcosm of what could face the entire world in future. Even more worryingly, more and more scientists are now starting to think that this future is probably already upon us.