On this page we’ll look at the geology of Kilimanjaro. We’ll also look at where it is, and how the various features of the mountain were formed.

In other words, we’ll be looking at where it is, why it is – and what does it look like!

Let’s start by looking at its location.

Kilimanjaro sits on the northern border of Tanzania, overlooking Kenya, and just over 200 miles south of the Equator. The area is not particularly mountainous; indeed, the nearest mountain to Kilimanjaro is Mount Meru, over 60km away to the south-west. The mountain sits approximately 270km from the shores of the Indian Ocean, and stands about 4800m above the African plains that surround it.

The geology of Kilimanjaro

Kilimanjaro is massive. You might already know that it stands an impressive 5895m ASL. You might be aware, too, that it claims to be the tallest freestanding mountain in the world. But did you also know that it measures up to 40km across? That it’s big enough, in fact, to boast not just one, but three summits!

So how did such a massive feature get there in the first place? Well, as you may also know, Kilimanjaro is actually a volcano. It is in fact the result of not one but three massive eruptions. It is these three eruptions that formed the mountain’s three peaks.

About 750,000 years ago (making Kilimanjaro a youngster in geological terms) molten lava burst through the fractured surface of the Great Rift Valley. This valley is a giant fault in the earth’s crust that runs through East Africa. (Actually, Kilimanjaro lies 50 miles from the East African Rift Valley, but such details need not concern us here).

The huge pressures behind this eruption pushed part of the Earth’s crust skywards, creating the Shira volcano, the oldest of the volcanoes forming the Kilimanjaro massif. Shira eventually ceased erupting around 500,000 years ago, collapsing as it did so to form a huge caldera. (A caldera is the deep, cauldron-like cavity on the summit of a volcano.) This caldera was actually many times the size of its original crater.

The formation of Kibo and Mawenzi 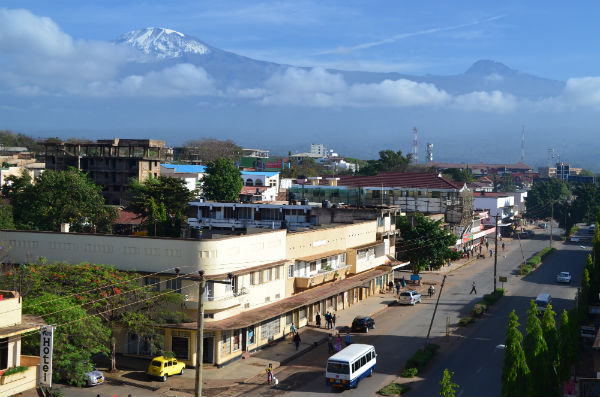 The twin peaks of Kilimanjaro from a hotel terrace in Moshi

Soon after Shira’s extinction, Mawenzi started to form following a further eruption within the Shira caldera. Though much eroded, Mawenzi has at least kept some of its volcanic shape to this day.

Then, 460,000 years ago, an enormous eruption just west of Mawenzi caused the formation of Kibo. Continual subterranean pressure forced Kibo to erupt several times more, forcing the summit ever higher until reaching a maximum height of about 5900m.

A further huge eruption from Kibo 100,000 years later produced Kilimanjaro’s characteristic shiny black stone. This stone, which lies scattered across the mountain, is in reality is just solidified black lava, or obsidian. This spilled over from Kibo’s crater into the Shira caldera and around to the base of the Mawenzi peak, forming the so-called Saddle.

Later eruptions created a series of distinctive mini-cones, or parasitic craters, that run in a chain south-east and north-west across the mountain. These eruptions also gave us the smaller Reusch Crater, inside the main Kibo summit.

The last volcanic activity of note, just over 200 years ago, left a symmetrical inverted cone of ash in the Reusch Crater, known as the Ash Pit, that can still be seen today.

Today, Uhuru Peak, the highest part of Kibo’s crater rim and the goal of most trekkers, stands at around 5895m. (The fact that the summit is around 5m lower today than it was 450,000 years ago is largely to the simple progress of time, with wind and ice eroding the summit.)

The Furtwangler Glacier on the Kibo summit

The Kibo peak has also subsided slightly over time. About one hundred thousand years ago a landslide took away part of the external crater. This created Kibo Barranco or the Barranco Valley (home of one of the more popular campsites).

The glaciers were also behind the formation of the valleys and canyons. The glaciers erode and smoothing the earth into gentle undulations all around the mountain. This happened less on the northern side where the glaciers on the whole failed to reach. As a result the valleys are sharper and more defined.

You can find out more about the mountain’s glaciers by visiting our glaciers page.

Is Kilimanjaro now an extinct volcano?

While eruptions are unheard of in recent times, Kibo is classified as being dormant rather than extinct. Visits the inner Reusch Crater and you can see why, as a strong sulphur smell still rises from the crater. The earth is hot to touch too. This heat prevents ice from forming. You can also see fumaroles in the Ash Pit at the centre of the Reusch Crater. (These are openings in the earth’s surface that emit steam and volcanic gases.)

How the geology of Kilimanjaro has influenced its appearance?

Kilimanjaro is not only the highest mountain in Africa, it’s also one of the biggest volcanoes on Earth, covering an area of approximately 388,500 hectares.

The summits of Kilimanjaro

Within this 388,500-hectare area are three main peaks, as shown in the picture here… 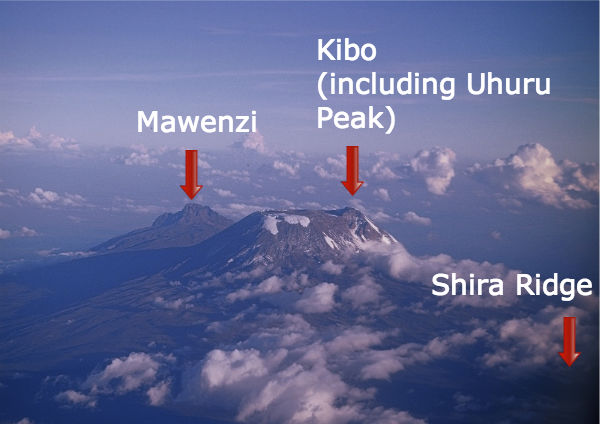 Kilimanjaro as seen from the west (in a plane – obviously!)

The Kibo summit is the best preserved crater on the mountain; its southern lip is slightly higher than the rest of the rim, and the highest point on this southern lip is known as Uhuru Peak. At 5895m, this is highest point in Africa and the goal of just about every Kilimanjaro trekker. Kibo is also the only one of the three summits which is permanently covered in snow, thanks to the large glaciers that cover large – though diminishing – areas of its surface (see below).

Kibo is also the one peak that really does look like a volcanic crater; indeed, there are not one but three concentric craters on Kibo. Within the inner Reusch Crater (1.3km in diameter) one can still see signs of volcanic activity, including fumaroles, the smell of sulphur and a third crater, the Ash Pit, 130m deep by 140m wide.

The outer, Kibo Crater (1.9 by 2.7km), is not a perfect, unbroken ring. There are gaps in the summit where the walls have been breached by lava flows; the most dramatic of these is the Western Breach (see photo). 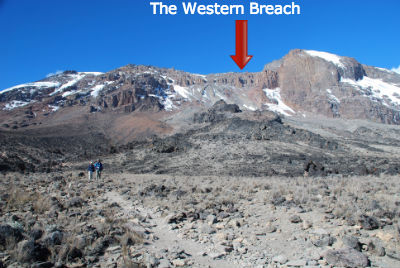 Perhaps the most important feature of Kibo, however, is that its slopes are gentle. This feature means, of course, that trekkers as well as mountaineers are able to reach the summit. Mawenzi is the second highest peak on Kilimanjaro. Seen from Kibo, Mawenzi looks less like a crater than a single lump of jagged, craggy rock emerging from the Saddle (see ‘Other features of Kilimanjaro’ below). This is merely because its western side also happens to be its highest, and hides everything behind it.

Walk around Mawenzi, however, and you’ll realize that this peak is actually a horseshoe shape, with only the northern side of the crater having been eroded away. Its sides too steep to hold glaciers, there is no permanent snow on Mawenzi, and the gradients are enough to dissuade all but the bravest and most technically accomplished climbers.

Mawenzi’s highest point is Hans Meyer Peak at 5149m but so shattered is this summit, and so riven with gullies and fractures, that there are a number of other distinctive peaks including Purtscheller Peak (5120m) and South Peak (4958m). There are also two deep gorges, the Great Barranco and the Lesser Barranco, scarring its north-eastern face.

The oldest and smallest summit on Kilimanjaro is known as the Shira Ridge, and lies on the western edge of the mountain. This is the least impressive peak, being nothing more than a heavily eroded ridge, 3962m tall at its highest point, Johnsell Point. This ridge is, in fact, merely the western and southern rims of the crater formed by the original volcanic eruption.

Other features on Kilimanjaro Trekkers strolling across the Saddle of Kilimanjaro

Separating Kibo from the second peak, Mawenzi, is the Saddle, at 3600ha the largest area of high altitude tundra in tropical Africa. This really is a beautiful, eerie place: a dusty desert almost 5000m high, featureless except for the occasional parasitic cone dotted here and there, including the Triplets, Middle Red and West Lava Hill, all running south-east from the south-eastern side of Kibo.

These are just some of the 250 parasitic cones that are said to stand on Kilimanjaro.Few people know this, but Kilimanjaro does actually have a crater lake. Lake Chala (aka Jala) lies some 30km to the south-east, and is said to be up to 2.5 miles deep.

The Shira Plateau is a large, rocky plateau, 6200ha in size, that lies to the west of the Kibo summit (ie between Kibo and the Shira Ridge). It is believed to be the caldera of the first volcanic eruption (a caldera is a collapsed crater) that has been filled in by lava from later eruptions which then solidified and turned to rock.

The paths on Kilimanjaro

Look down at Kilimanjaro from above and you should be able to count seven paths trailing like ribbons up the sides of the mountain. Five of these are ascent-only paths (ie you can only walk up the mountain on them and are not allowed to come down on these trails); one, Mweka, is a descent-only path, and one – the Marangu Route – is both an ascent and descent trail.

At around 4000m these trails meet up with a path that loops right around the Kibo summit. This path is known as the Kibo Circuit, though it’s often divided into two halves, known as theNorthern and Southern circuits.

From here, three further paths lead up the slopes to the summit itself. For a brief description of the trails, and a look at their relative merits, follow this link to our Routes up Kilimanjaro page. While for a route map for Kilimanjaro, click on the image below: 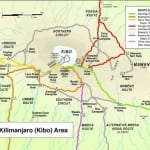 For further details, check out the full descriptions of each in the book, with carefully drawn maps and detailed information on each route. Note that some trekking agencies vary the routes slightly, particularly on the Shira Plateau, but any agency worth its salt will provide you with a detailed itinerary, enabling you to check exactly which path you will be taking each day.