The conquest of Kilimanjaro

Early attempts on the summit: Teleki and Meyer

While Germany continued to colonise East Africa, attempts to be the first person to climb Kilimanjaro continued apace. In 1887, Count Samuel Teleki of the Austro-Hungarian Empire made the most serious assault on Kibo so far. He, however, had to turn back following ‘a certain straining of the membrane of the tympanum of the ear’.

Then the American naturalist, Dr Abbott, who had primarily come to investigate the fauna and flora of Kili, made a rather reckless attempt. Abbott became ill fairly early on in the climb but his companion, Otto Ehlers of the German East African Company, pushed on. Ehlers later claimed he had reached 19,680ft (5904m). Not for the first time in the history of climbing Kilimanjaro, however, there is some scepticism about this figure. Mainly because it is at least 8m above the highest point on the mountain!

Both Teleki and Abbott, however, played a part in the success of the eventual conqueror of Kilimanjaro, Dr Hans Meyer. Teleki, by providing information about the ascent to Meyer in a chance encounter during Meyer’s first trip to the region in 1887. And Abbott, by providing accommodation in Moshi for Meyer and his party during their successful expedition of 1889.

Hans Meyer was a geology professor and the son of a wealthy editor from Leipzig. (He himself later joined the editorial board and became its director. But he retired in 1888, one year before the conquest of Kili, to become professor of Colonial Geography at Leipzig University). In all he made four trips to Kilimanjaro. Following the partial success of his first attempt in 1887, when he managed to reach 18,000ft (5400m), Meyer returned the following year for a second assault. This time he was accompanied on his trek by experienced African traveller and friend Dr Oscar Baumann.

Unfortunately, their timing couldn’t have been worse. The Abushiri War, an Arab-led revolt against German traders on the East African coast, had just broken out. Meyer and his friend Baumann were captured, clapped into chains and held hostage by Sheikh Abushiri himself, the leader of the insurgency. In the end both escaped with their lives, but only after a ransom of ten thousand rupees was paid.

However, on his third attempt, in 1889, Meyer finally became the first person to climb Kilimanjaro. Though no doubt a skilful and determined climber, Meyer’s success can largely be attributed to his recognition that the biggest obstacle to a successful assault was the lack of food available at the top. Meyer solved this by establishing camps at various points along the route that he had chosen for his attempt, including one at 12,980ft (3894m; Abbott’s camp); one, Kibo camp, ‘by a conspicuous rock’ at 14,210ft (4263m); and, finally, a small encampment by a lava cave and just below the glacier line at 15,260ft (4578m). 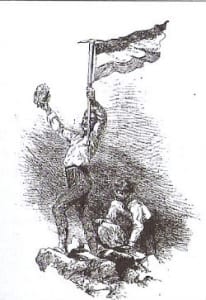 Thanks to these intermediary camps, Meyer was able to conduct a number of attempts on the summit without having to return to the foot of Kili to replenish supplies after each; instead, food was brought to the camps by the porters every few days.

He also had a considerable back-up party with him, including his friend and climbing companion, Herr Ludwig Purtscheller – a gymnastics teacher and alpine expert from Salzburg – two local headmen, nine porters, three other locals who would act as supervisors, one cook and one guide supplied by the local chief, Mareale, whom he had befriended during his first trip to the region. These men would help to carry the equipment and man the camps, with each kept in order by Meyer’s strict code of discipline, where minor miscreants received ten lashes, and serious wrongdoers twenty.

The size of his entourage, however, shouldn’t detract from the magnitude of Meyer’s achievement. As well as the usual hardships associated with climbing Kilimanjaro, Meyer also had to contend along the way with various obstacles. Many of his party deserted him. There was a lack of any clear path. They had to negotiate elephant traps (large pits dug by locals and concealed by ferns to trap the unwary pachyderm). Plus, of course, there was the unpleasant, rapacious chief of Moshi, Mandara.

What’s more, it is also worth noting here that Meyer did not begin his walk on the mountain, as today’s visitors do. Instead, he started in Mombasa. This is 14 days by foot, according to Meyer, from the Kilimanjaro town of Taveta!

Then there was the snow and ice, so much more prevalent in the late 1800s on Kili than it is today. Indeed, above 4500m Meyer had to trek upon snow for virtually the whole day. (By comparison, his route up Kibo from the Saddle is not too dissimilar to today’s Marangu Route – and there is usually no snow on the trail now until the summit!) A memorial to Hans Meyer at Marangu Gate

The added difficulties caused by the snow are well described in Meyer’s book Across East African Glaciers. Rising at 2.30am for their first assault on the summit, Meyer and Purtscheller spent most of the morning carving a stairway out of a sheer ice-cliff. Every stair was laboriously hewn with an average of twenty blows of the ice axe. (The cliff, incidentally, formed part of the Ratzel Glacier, named by Meyer after a geography professor in his native Leipzig.)

As a result, by the time they reached the eastern lip of the crater, the light was fading fast. With the approach of inclement weather, too, they were forced to return before they could reach the highest point of that lip.

On their second attempt, however, three days later on 6 October 1889, they were lucky. The stairs were still intact in the ice from the first ascent. So they were able to gain the eastern side of the rim by mid-morning. From there it was a straightforward march to the three small tumescences situated on the higher, southern lip of the crater. The middle one, so it transpired, also happened to be the highest point of the mountain.

Kilimanjaro had finally been conquered.

<< History of Kilimanjaro | The Germans in East Africa >>