When is the best time to climb Kilimanjaro?

The mountain can be climbed all year round. That said, there are certainly times when it is better to climb. There are main two factors that we take into consideration when choosing when to head to the mountain. The first, and most important, is the weather. The second factor we consider is how busy it is on the mountain. Because most people prefer a  quieter trek, than one where the paths are choked with crowds of tourists. So, bearing those two factors in mind, on this page we look at the best time to climb Kilimanjaro.

The first, and most important factor in deciding when to climb Kilimanjaro, is the weather. The main trekking seasons on mountain correspond with the mountain’s two ‘dry’ seasons. These are January to mid-March and June to October. Note that it will still probably rain on your trek during these months too – it’s rare to climb without getting rained on at least once. You can read more about the mountain’s seasons by visiting our weather page.

Of course you can climb in the rainy season too (the wet seasons are April-May, which is often called the ‘long rainy season’ or simply the ‘long rains’ and November-mid-December). But of course the weather conditions may not be ideal and there is a much higher chance you’ll encounter rain. Thick clouds wreathe summits of Kibo and Mawenzi too. Indeed, several agencies even suspend their operations in November and December.

It’s true that visibility is less at this time though we take issue with those companies that say that your chances of reaching the summit are significantly lower too; that simply isn’t the case. True, once every couple of years or so there may be too much snow, blocking you from reaching the summit. But this is rare. So as long as you are dressed for the conditions then, in our experience, you’ve got just as good a chance of getting to the summit.

Curiously, Christmas and New Year, when the weather is far from perfect, are actually amongst the most popular times for climbing Kilimanjaro.

The following graph gives you an idea of the average temperature on Kilimanjaro at various times of year. 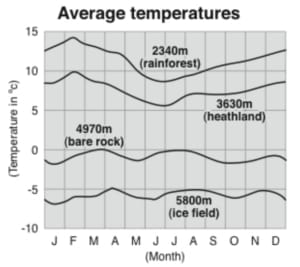 As to the relative merits of the two Kilimanjaro trekking seasons, the differences are small although significant:

The January to March season tends to be (slightly) colder and there is a much greater chance of snow on the path at this time. The days, however, are often clearer, with only the occasional brief shower. It is usually an exceptionally beautiful time to climb and is often a little quieter than the other peak season of June to October, which coincides with the main academic holidays in Europe and the West. In this latter season the clouds tend to hang around the tree-line following the heavy rains of March to May. Once above this altitude, however, the skies are blue and brilliant and the chance of precipitation minimal (though still present).

As we mentioned at the start, when we’re trying to choose when to climb Kilimanjaro we don’t just look at the weather. We also look at how busy the mountain will be.

But although the June to October season tends to be busier, this is not necessarily a disadvantage. For example, if you are travelling independently to Tanzania but want to join up with other travellers for your trek, then the high visitor numbers in the June-October peak season will give you the best chance of doing this.

What’s more, it’s not busy throughout the June-October season. June and July are actually quite quiet, particularly when compared to the two months that follow. It’s only August and September that are very busy months. Indeed, September is the busiest time, when the number of people on the mountain is at its greatest.

But even if you do crave solitude when you walk, it can still be found during September. After all, the trails are long, so you can always find large gaps between trekkers where you can walk in peace. Besides, the mountain is just so huge that its presence will dwarf your fellow trekkers until they’re quite unnoticeable.

The following graph shows the average snowfall on Kilimanjaro throughout the year. 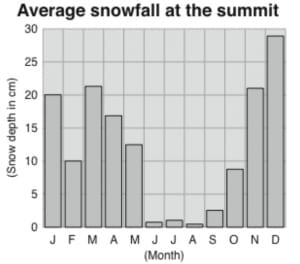 We like to offer Full Moon Kilimanjaro treks as part of our trek schedule. We do this because we realise that the final night-time push up the slopes of Kibo to the summit is best done under the light of a full moon.  Visibility is that much greater, of course. There is also those who say that the weather during the full moon period is more settled and calm. 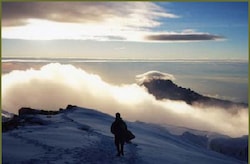 These full moon treks are very popular. Indeed, some would say too popular. So if you want to enjoy the advantages provided by the full moon, but want to avoid the crowds, then you can always choose to climb a day or two later or earlier.

If the Full Moon doesn’t appeal, then how about a New Moon Kilimanjaro climb? After all, one of the chief pleasures of a Kilimanjaro climb is to gaze up at the stars. The lack of light pollution and the height that you are sleeping at means the Heavens are just spectacular. By choosing to climb over a New Moon, the light reflected from the Moon to the Earth is at its lowest, allowing you to see the stars at their brilliant best! It’s certainly a great time to climb.

When is the best time to climb Kilimanjaro: my opinion

As I mention on the homepage of this site, my favourite months to climb Kilimanjaro are March and October. The weather is usually still good at these times, but the crowds have largely disappeared. But I wouldn’t get too bothered if you are climbing at a busy time. Because, in my opinion, whenever you climb the mountain – even if it’s the rainy season – it’s always special, and always fun.