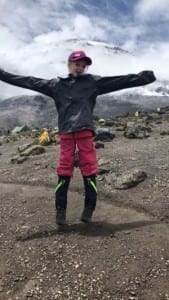 Earlier this month, on the morning of the 16 March, 2018, Montannah Kenney managed to walk from the park gates to the very summit of Africa’s Highest Mountain. In doing so, she became the youngest girl ever to climb to the top of Kilimanjaro.

Miss Kenney, from Austin, Texas, climbed with her mum. They planned the trek in memory of Montannah’s father, who died when Montannah was just three years old.

Not only did Montannah smash the record – which had previously been held by eight-year-old Roxy Getter from Florida, but she also came close to becoming the youngest person, male or female, ever to reach the summit! While it is not known exactly how old Keats Boyd, the first seven-year-old to climb Kili, was when he climbed Kili, we do know that Cash Callahan, who reached the summit in January this year, was just a month younger than Montannah when he summited. (To be precise, Montannah was 2,865 days old when she reached the top, while Cash was 2,824 days.)