Skip to content
The name Kilimanjaro and its meaningHenry

Why is it called ‘Kilimanjaro’?

Despite extensive studies into the etymology of the name Kilimanjaro, nobody is sure where it comes from.  Nor, for that matter, what it means.

(By the way, note it’s not spelt ‘Kilamanjaro’, though you’d be amazed at how many people spell it that way.) 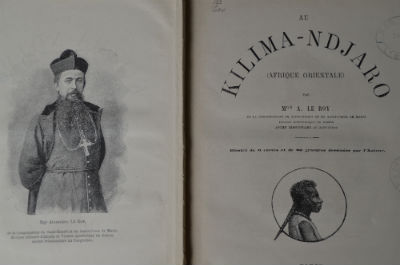 An early spelling of Kilimanjaro, from the title of a beautiful biography by French missionary Mgr LeRoy

Is it a Chagga word?

When looking for the name’s origin, it’s sensible to begin such a search in one of the local Tanzanian dialects. More specifically, we shouls look at the language spoken by those who live in its shadow. They are the Chagga people.

True, the name Kilimanjaro bears no resemblance to any word in the Chagga vocabulary. But if we divide it into two parts, then a few possibilities present themselves. One is that Kilima comes from the Chagga term kilelema, meaning ‘difficult or impossible’. As for jaro, it could come from the Chagga terms njaare (‘bird’) or jyaro (‘caravan’).

In other words, the name Kilimanjaro means something like ‘That which is impossible for the bird’. Or perhaps ‘That which defeats the caravan’. These are names which, if this interpretation is correct, are clear references to the sheer enormity of the mountain.

Whilst this is perhaps the most likely translation, it is not, in itself, particularly convincing. Especially when one considers that while the Chagga language would seem the most logical source for the name, the Chagga themselves do not actually have one single name for the mountain!

Instead, they don’t see Kilimanjaro as a single entity but as two distinct, separate peaks: Mawenzi and Kibo. (These two names, incidentally, are definitely Chagga in origin. They come from the Chagga terms kimawenzi – ‘having a broken top or summit’ – and kipoo – ‘snow’ – respectively.)

Is ‘Kilimanjaro’ a Swahili word?

Assuming Kilimanjaro isn’t Chagga in origin, therefore, the most likely source for the name Kilimanjaro would seem to be Swahili. This is the majority language of the Tanzanians. Johannes Rebmann’s good friend and fellow missionary, Johann Ludwig Krapf, wrote that Kilimanjaro could be a Swahili word meaning ‘Mountain of Greatness’. Unfortunately, he is noticeably silent when it comes to explaining how he arrived at such a translation! He also suggested it could be a composite Swahili/Chagga name meaning ‘Mountain of Caravans’. (Jaro, as we have previously explained, being the Chagga term for ‘caravans’.)

Thus the name could refer to the many trading caravans that would stop at the mountain for water.

The major flaw with both these theories, however, is that the Swahili term for mountain is not kilima but mlima. In fact, kilima is actually the Swahili word for ‘hill’!

The third and least likely dialect from which Kilimanjaro could have been derived is Masai. This the major tribe across the border in Kenya. The Masai word for spring or water is njore, which could conceivably have been corrupted down the centuries to njaro. But even if that’s true, there is no relevant Masai word similar to kilima.

Furthermore, the Masai call the mountain Oldoinyo Oibor, which means ‘White Mountain’. Indeed, Kibo itself is known as the ‘House of God’, as Hemingway has already told us at the beginning of his – and our – book. Few experts, therefore, believe the name is Masai in origin.

Other theories include the possibility that njaro means ‘whiteness’. This, of course, would refer to the snow cap that Kilimanjaro permanently wears. Or it could be that Njaro is the name of the evil spirit who lives on the mountain. Certainly the folklore of the Chagga is rich in tales of evil spirits who dwell on Kilimanjaro, causing discomfort and even death to all those who climb it.  The first European to see the mountain, Johannes Rebmann himself, refers to ‘Njaro, the guardian spirit of the mountain’. However, it must also be noted that the Chagga’s legends make no mention of any spirit going by that name.

And so we are none the wiser. But in one sense at least, it’s not important. What the mountain means to the 50,000 who walk up it every year is far more meaningful than any name we ascribe to it.

<< Background Information | Location, geology and what it looks like >>