The beginnings of the Chagga

The Chagga are believed to have arrived between 250 and 400 years ago from the north-east, following local upheaval in that area. Logically, therefore, the eastern side of the mountain would have been the first to have been settled. Upon their arrival these new immigrants would have found that the mountain was already inhabited. An aboriginal people known as the Wakonyingo, who were possibly pygmies, were already living here, as indeed were the Wangassa, a tribe similar to the Masai, and the Umbo of the Usambara mountains. All of these groups were either driven out or absorbed by the Chagga.

Initially, these new immigrants were a disparate bunch, with different beliefs, customs and even languages. With no feelings of kinship or loyalty to their neighbour, they instead settled into family groups known as clans.

According to Dundas, in his day some 732 clans existed on Kilimanjaro; by 1924, however, when his book was published, some of these clans were already down to just a single member. 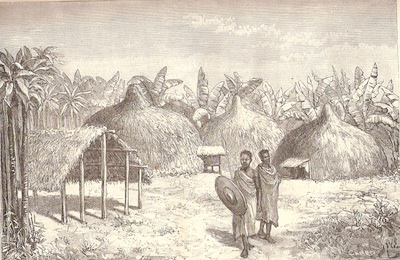 These family ties were gradually cut and lost over time as people moved away to settle on other parts of the mountain. Thus, in place of these blood ties, people developed new loyalties to the region in which they were living and the neighbours with whom they shared the land. Out of this emerged twenty or so states or chiefdoms, most of them on a permanent war footing with the other nineteen. Wars between the tribes, and indeed between villages in the same tribe, were commonplace, though they usually took the form of organized raids by one village on another rather than actual pitched battles. Slaves would be taken during these raids, cattle rustled and huts burned down, though there was often little bloodshed — the weaker party would merely withdraw at the first sign of approaching hostilities and might even try to negotiate a price for peace.

Eventually the number of different groups was whittled down to just six tribes, or states, with each named after one of the mountain’s rivers. So, for example, there are the Wamoshi Chaggas (after the Moshi River) and the Wamachame Chaggas who settled near the Machame River. With all this intermingling going on, a few words inevitably became used by all the people living on the mountain — and from this unlikely start grew a common language, of which each tribe had its own dialect. Similar customs developed between the tribes, though as with the language they differed in the detail. However, it was only when the Germans took control of the region during the latter part of the nineteenth century and the local people put aside their differences to present a united front in disputes with their colonial overlords that a single ethnic group was identified and named the Chagga. From this evolved a single, collective Chagga consciousness.

Today the Chaggas, despite their diverse origins, are renowned for having a strong sense of identity and pride. They are also amongst the richest and most powerful people in Tanzania, thanks in part to the fertile soils of Kilimanjaro, and in part to the Western education that they have been receiving for longer than almost any other tribe in Africa, Kilimanjaro being one of the first places to accept missionaries from Europe.