What is Altitude Sickness or AMS?

The science of altitude sickness

No matter how hard the authorities try, the bald fact is that altitude sickness on Kilimanjaro still kills more trekkers than any other cause.

This is despite the fact that the actual science behind altitude sickness is fairly simple to follow.

Let’s begin by looking at some basic basic facts:

Throughout the troposphere (ie from sea level to an altitude of approximately 10km), the air composition is always the same. That is say, it is composed of 20% oxygen and nearly 80% nitrogen.

So when you read that there is a lack of oxygen at the summit, that’s not strictly true. Oxygen still makes up 20% of the air at the top. So the problem is not lack of oxygen – but the lack of air pressure.

To put it in more precise terms. Atmospheric pressure drops by about tenth for every 1000m of altitude. Thus the air pressure at the top of Kilimanjaro is approximately 40% of that found at sea level.

To put it in layman’s terms, each breath inhaled at the summit still consists of 20% oxygen. However, it becomes much harder to fill your lungs since the atmosphere is not ‘pushing’ so much air into them. As a result, every time you breathe on Kibo you take in only about half as much air – and thus oxygen – as you would if you took the same breath in Dar es Salaam.

Oxygen and us: the truth

This can, of course, be seriously detrimental to our health. Because oxygen is, after all, pretty essential to our physical well-being. All of our vital organs need it, as do our muscles. They receive their oxygen via red blood cells, which are loaded with oxygen by our lungs. These are then pumped around your body by our heart, delivering oxygen as they go. Problems arise at altitude when that most vital of organs, the brain, isn’t getting enough oxygen. As a result, it malfunctions. And because it’s the body’s central control room, if the brain malfunctions, so does the rest of you. The consequence of all this, of course, is often fatal. 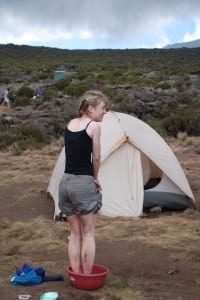 There’s no evidence that standing in a bucket of water can cure altitude sickness – but it can’t hurt to try.

So how does a lack of oxygen lead to altitude sickness?

Fortunately, your body is an adaptable piece of machinery. In particular, it can adjust to the lower levels of oxygen that you breathe in at altitude. Unconsciously, you will start to breathe deeper and faster and your blood will thicken as your body produces more red blood cells. Your heart will also beat faster. As a result, your essential organs will receive the same level of oxygen as they always did.

But your body needs time before it can effect all these changes. Though the deeper, faster breathing and heart-quickening happen almost as soon as your body realizes that there is less oxygen available, it takes a few days for the blood to thicken. And with Kilimanjaro, of course, a few days is usually all you have on the mountain. As a consequence, the changes may simply not happen in time. The result, of course, is AMS.

The levels of AMS

On Kilimanjaro, it’s fair to say that most people will get some symptoms of the illness and will fall into the mild-to-moderate categories. Let’s look at the three categories in greater detail now.

Most people on Kilimanjaro will get at least mild mountain sickness. Having symptoms of mild AMS is not necessarily a sign that the sufferer should give up climbing and descend immediately. Indeed, most or all of the symptoms suffered by those with mild AMS will disappear if the person rests and ascends no further. If we assume the recovery is complete, the assault on the summit can continue.

The same goes for moderate AMS too, though here the poor individual and his or her symptoms should be monitored far more closely. Because the danger here is that they can easily get worse and developing into severe AMS. This is a lot more serious and sufferers with severe AMS should always descend immediately, even if it means going down by torchlight in the middle of the night.

The following pages describe the symptoms of the various levels of AMS, while further information can be found at the website of the British Mountaineering Council.

The symptoms of altitude sickness >>