Deciding which trekking route to take to the summit of Kilimanjaro is best for you is very much a personal decision. But in this section we try to give you as much information as possible to help you make the best decision.

As we mention in the introduction, the park authorities have designated six official paths leading up the slopes of Kili to Uhuru Peak. WE have provided a map of the routes that you can see here: Just to recap, the routes are:

In addition to these trails there are a few ‘unofficial’ routes up Kilimanjaro, such as the Alternative Lemosho (aka Northern Circuit Route) and the Full Circuit Umbwe. These have ben constructed by the more creative agencies by combining segments of the above trails make a new route. These can be some of the best hiking trails around, with high success rates and fewer crowds.

Eventually, each of these six official Kilimanjaro routes reach the foot of the main Kibo summit. This is the snowy peak that you see in all the photos. From the foot of Kibo, three paths then take you up to Kibo’s crater rim. They are:

Which of these routes you will take to the summit depends upon which of the six paths you took to get this far.

The Shira, Lemosho, Machame and Umbwe routes can use either the difficult Arrow Glacier Route or the easier (but longer) Barafu Route.

The Marangu and Rongai trails use the Kibo Huts Route.

The rules regarding which path you take to descend are as follows:

Those on the Machame, Umbwe, Lemosho or Shira routes must take as their descent trail the Mweka Route

Those who ascended on the Marangu or Rongai/Loitokitok trails must descend by the Marangu Route. 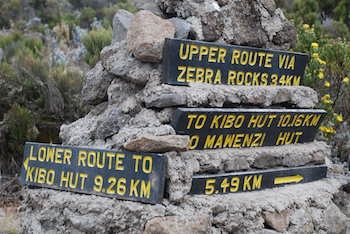 I keep on hearing about the Northern and Southern Circuits – where are these routes?

Encircling the Kibo cone is a path known as either the Northern Circuit or the Southern Circuit depending on which side of the mountain you are. You can walk right around Kibo on this path. However, few climbers ever do. But all the paths either meet this circular path at some point and many follow it for a while. The ‘unofficial’ routes such as the Alternative Lemosho Trail also utilise large sections of these paths.

Which route is the best?

Well, in one sense it’s very difficult to answer this question. Because everybody wants something different from their trek.

For many people, the sole purpose of climbing Kilimanjaro is to get to the summit. Fail to do that and the whole trip has been wasted. If this is you then Lemosho, Machame and Rongai (the one with the Mawenzi diversion) are, statistically, the best bets. (The Alternative Lemosho Route that we offer actually has the best success rate of all.)

On the other hand, those looking to avoid the crowds (again, ignoring alternative routes) should look at Lemosho and Umbwe.

For a no-nonsense, cheap-ish Kilimanjaro climb then Machame, Marangu and Umbwe are good.

While if you don’t want to stay in tents then Marangu is the only option.

So what is my personal favourite of all the Kilimanjaro trails?

Well, the part of the mountain I enjoy the most is the forest on the lower slopes. I also love taking photographs and so appreciates great views and scenery. Furthermore, I like to avoid the crowds on the mountain. If you’re going to spend a week on one of the planet’s most unique wildernesses, it’s good to spend it without hundreds of other trekkers. A few others is nice, but not hundreds. And yes, I do also like to acclimatise well: life’s always so much better when you don’t have a splitting headache. And I do like to reach the summit too! – so any route that aids this is good.

For this reason, my favourite of the ‘official’ routes is Lemosho, which ticks all of the above boxes: the forest is the best in my opinion, the views and scenery once you leave the forest and gaze at Kibo across the Shira Plateau are jaw-dropping, and the chances of getting to the summit are high, particularly as it’s also the longest ascent route on the mountain. It’s also a fairly quite route, at least for the first 3-4 days before it joins the Machame Route and you march alongside the hordes on this route all the way to Barranco Camp and onto Barafu Camp.

Of all the routes – official and otherwise – the Alternative Lemosho is my favourite path of all. It’s both even quieter than the official Lemosho and seems to improve one’s chances of acclimatising still further. Note that not every tour operator will offer this route – indeed, many don’t.

But I should reiterate my statement that I made at the start of this piece. Whatever route you’re on, you’re going to be on Kilimanjaro. So it’s inconceivable you’ll be disappointed.

A description of each of the six main trails up Kilimanjaro can be found on this website. Please note that in the guidebook we provide comprehensive, day-by-day descriptions of each of the Kilimanjaro routes up the mountain, including detailed sketch maps covering every stage of every path. Note, too, that while at the start of each route description we give you an idea of how long a trek should take on that trail, it’s always a good idea to add an acclimatisation day if possible to increase your chances of getting to the summit.

Want to know more about the Kilimanjaro Routes?

The following pages take each of the routes, individually, and go through a day-by-day description of them. And unlike other websites, they are written by somebody who has climbed everyone of them. At least twice. And often many more times. And as such, they aren’t written by someone who hasn’t climbed them at all. But who still feels entitled to call himself or herself an expert, because they can read and copy our work.

So if you want an authentic, first-hand account of the routes – read on! While for pictures of each of the routes, visit our pinterest page!