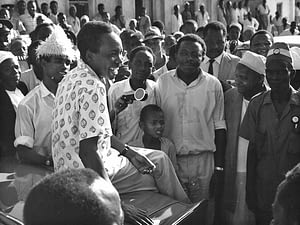 Julius Nyerere, the Father of the Nation

The twentieth century witnessed the inevitable but gradual shift away from exploration towards tourism.  The most significant change occurred in 1932 with the building of Kibo Hut; name plates and signs were put up too, as the mountain was gradually made more tourist-friendly. With a ready base for summit assaults now established, tourists began to trickle into Tanzania to make their own attempt on Africa’s greatest mountain. In 1959 the mountain became the focus for nationalist feelings and a symbol of the Tanganyikans’ independence aspirations following Julius Nyerere’s speech to the Tanganyika Legislative Assembly.

Nyerere eventually got his wish and, after independence was granted in 1961, a torch was indeed placed on the summit of Kilimanjaro. Independence also provided Tanganyika with the chance to rename many of the features of the mountain; in particular, the very summit, named Kaiser Wilhelm Peak by Hans Meyer, was renamed Uhuru Peak – Uhuru meaning, appropriately, ‘Freedom’ in Swahili. 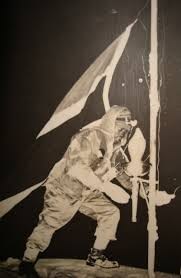 Since this mountain’s moment of patriotic glory, the story of Kilimanjaro has largely been about tourism. The early trickle of tourists of seventy years ago is nowadays more akin to a flood, with visitor numbers still increasing exponentially, from less than a thousand in the late 1950s to 11,000 in the mid-1990s, to the 35,000-plus we see today.

What has been an economic boon to the people of Kilimanjaro, however, has brought little benefit to the mountain itself. With the increase in the number of trekkers comes commensurately greater numbers of pressures and problems. Its soil is being eroded, its vegetation is being burnt or chopped, its wildlife is disappearing and its glaciers are melting. Along with these environmental pressures come challenges to its dignity, as climbers dream up ever more bizarre ways of climbing to the top, whether it’s driving up by motorcycle or walking in fancy dress, as we discussed in the introduction to this book.

Then there’s the problem of fire. In February 1999 a huge blaze swept across the upper slopes of Kilimanjaro. The fires were first discovered on February 6 and over the next five days 70 hectares were destroyed in the fire. Thanks to the combined efforts of 347 villagers, park rangers and 40 soldiers of the 39th Squadron of the Tanzanian People’s Defence Force, the main blaze was eventually brought under control, though not before considerable damage had been done to the mountain.

Evidence of fire can still be seen in places on Kili, particularly in the moorland zone on the Marangu and Machame routes where new plants now grow between the charred remains of branches and shrubs. Further fires, particularly on the Shira Plateau, have caused yet more lasting damage and as recently as September 2006 another blaze, this time on Kilimanjaro’s north-western side, caused further damage.

Depressingly but unsurprisingly, human activity is believed to have been behind the fires. Twenty-two men from the Kamwanga and Rongai districts were arrested for the 1999 fire, having been identified as the culprits by six hundred villagers in a secret ballot. The men were all squatters living illegally in the protected areas of the national park; according to one minister who visited the scene of the devastation, there were up to ten thousand such squatters living in Kilimanjaro’s forests, most of whom made their living by collecting honey. It is believed that a cigarette butt discarded by one of them started the blaze, though others have pointed an accusing finger at local farmers who like to clear their farms by fire before the start of the annual rains the following month.

Yet no matter how many indignities are heaped upon it, Kilimanjaro continues to inspire both awe and respect in all who gaze upon it. And while man will continue to visit in droves and in his clumsy, careless way will carry on defacing and demeaning Africa’s most charismatic place, setting it ablaze and covering it with litter, the mountain itself remains essentially the same powerful, ineffably beautiful sight it always was; perhaps because, while we throw all that we can at it, the Roof of Africa does what it always has done – and what it does best: it simply rises above it all.