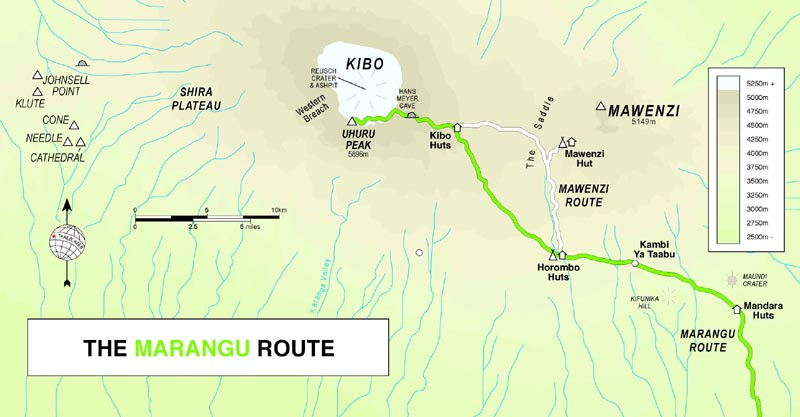 The Marangu Route is the oldest and traditionally the most popular trail, and the one that comes closest (though not very) to the trail Hans Meyer took in making the first successful assault on the summit. It is the only trail where camping is not necessary, indeed not allowed, with trekkers sleeping in dormitory huts along the way. From the Kibo Huts, trekkers climb up to the summit via Gillman’s Point.

In terms of duration, the Marangu Route is one of the shorter trails, taking just five days. Many people, however, opt to take an extra day to acclimatize at Horombo Huts, using that day to visit the Mawenzi Huts Campsite at 4538m. From a safety point of view this is entirely sensible and aesthetically such a plan cannot be argued with either, for the views from Mawenzi across the Saddle to Kibo truly take the breath away; assuming, that is, that you have some left to be taken away after all that climbing.

Why is the Marangu Route known as the ‘Coca Cola Trail’?

Because this trail is popularly called the ‘Tourist Route’ or ‘Coca Cola trail’ (Coke being a soft drink, of course, as opposed to the Machame Route while is sometimes called the Whisky Route), some trekkers are misled into thinking this five- or six-day climb to the summit is simply a walk in the (national) park. But remember that a greater proportion of people fail on this route than on any other. True, this may have something to do with the fact that Marangu’s reputation for being ‘easy’ attracts the more inexperienced, out-of-condition trekkers who don’t realize that they are embarking on a 35-kilometre uphill walk, followed immediately by a 35-kilometre knee-jarring descent.

But it shouldn’t take much to realize that Marangu is not much easier than any other trail: with the Machame Route, for example, you start at 1828m and aim for the summit at 5895m. While on Marangu, you start just a little higher at 1860m and have the same goal. So simple logic should tell you that it can’t be that much easier.

Accommodation on the Marangu Route

The main reason why people say that Marangu is easier is because it is the only route where you sleep in huts, rather than under canvas. There are 70 spaces at Mandara Huts, 148 at Horombo – the extra beds are necessary because this hut is also used by those descending from Kibo – and just 58 at Kibo.

The fact that you do sleep in huts makes little difference to what you need to pack for the trek, for sleeping bags are still required (the huts have pillows and mattresses but that’s all) though you can dispense with a ground mat for this route. You may also need some small change should you give in to temptation and decide that the exorbitant price of sweets and drinks that are available at the huts is still a price worth paying. The fact that there’s no tent to carry, however, means you can probably get away with just two-three porters per person, or fewer if you carry your own bag – something of a false economy we’ve found, as we believe it increases your chances of suffering from AMS.

Regarding the sleeping situation, it does help if you can get to the huts early each day to grab the better beds. This doesn’t mean you should deliberately hurry to the huts, which will reduce your enjoyment of the trek and increase the possibility of AMS. But do try to start early each morning: that way you can avoid the crowds, beat them to the better beds, and possibly improve your chances of seeing some of Kili’s wildlife too.

The disadvantages of the Marangu Route

The biggest drawback with Marangu is the fact that it is one of the shorter routes on the mountain – and thus, has one of the worst ‘success rates’ for getting people to the summit, as it does not give trekkers enough time to acclimatise. Most agencies will counter this by taking a ‘rest day’ at Horombo Huts on day 3 where, rather than plough on to Kibo Huts, trekkers spend two nights at Horombo and that third day marching up the slopes of Mawenzi, thereby aiding their acclimatisation. Thus while Marangu can be completed in five days, most sensible people will take at least six.

Another aspect of the Marangu Route that could be seen by some as a drawback is that it is the only one where you ascend and descend via the same path. However, there are a couple of arguments to counter this perception: firstly, between Horombo and Kibo Huts there are two paths and it shouldn’t take too much to persuade your guide to use one trail on the ascent and a different one on the way down; and secondly, we think that the walk back down the Marangu Route is one of the most pleasurable parts of the entire trek, with splendid views over the shoulder.

Furthermore, it offers you the chance to greet the crowds of sweating, red-faced unfortunates heading the other way with the smug expression of one for whom physical pain is now a thing of the past, and whose immediate future is filled with warm showers and cold beers.

For a file of waypoints for all our routes, please click on the following link GPS Waypoints. This will take you to the relevant page on the website of Trailblazer Publications, who publish the Kilimanjaro guide. The file is in .gpx format, so you can download it straight onto your GPS.